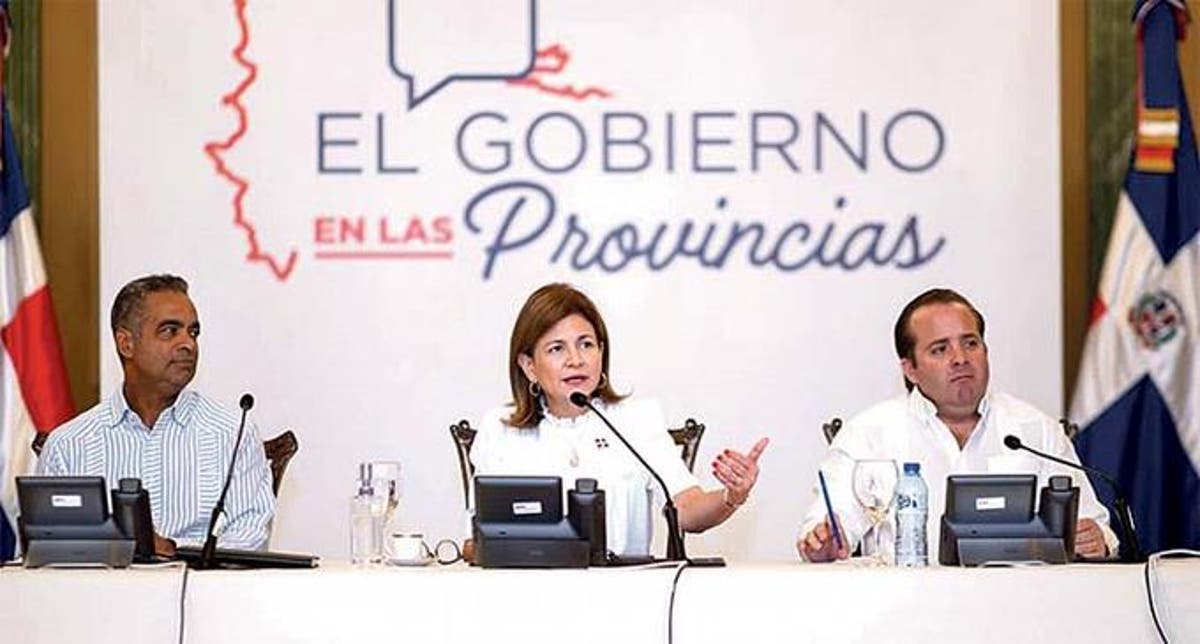 Santo Domingo, DR
The government yesterday held the second day of the “Government in the provinces” project, through which they seek to “bring closer and promote” the works carried out by President Luis Abinader.

Through a press conference, the authorities affirmed that the most frequent needs and, therefore, the most requested by the community leaders and the population in general of the different localities reached by the project are in the areas of health, education, and road works.

The details were offered by the Administrative Minister of the Presidency, José Ignacio Paliza, who emphasized that for this reason, the leading officials of these government entities were at the National Palace to answer any doubts that may arise during the development of the second edition of the government initiative.

“That is why we are here, fundamentally representatives of the Ministries of Education and Public Works, as well as of the National Health System, which is always the most demanding area,” said Paliza.

Meanwhile, Vice President Raquel Peña said that the work is going at a “very good pace” and that in areas such as Santo Domingo Oeste, the yield on sidewalks and curbs is “more advanced” than expected.

Peña emphasized that they “seek to monitor, see and, of course, show their faces” and that each of the ministers and directors is present and “closer” to all the Dominican people.

“All this with a single objective, President Abinader wants to be close to his people, he wants to help, to have his heart and ear in each of the corners of the municipalities throughout the national territory,” added the vice president.

While the interim Minister of the Presidency, Joel Santos Echavarría, said that the strategies in the areas of infrastructure, sports, health, and education, reflect “the direct concerns of the population.”

One of those who went out to listen to the needs of the people was the director of Customs, Eduardo Sanz Lovatón, who was in the Los Guandules sector in a second meeting with the community leaders of District 3 of the National District.

On the first occasion, last May 22, 19 community leaders from the different sectors of the district presented the predominant needs waiting to be solved.

On this occasion, the representative of the President of the Republic in the program presented to the community the answers to the action of promises made to them.

A coalition of neighborhood leaders of the 24 de Abril sector affirmed that the presence of governmental works had been evidenced in their neighborhood, and they asked for the repair of streets and equipment for the members of the National Police of the zone, remodeling of clubhouses and improvement of the electric power and water distribution networks. While waiting to implement other promised projects, several leaders approached the official, who said he had committed to “listen to the sector by sector, problem by problem.”

Yadira Henríquez, director of the Social Assistance Plan of the Presidency, was present at the activity and said that “each one (of the officials present) has done their best in their tasks” and also recognized the management and work that the customs director has been able to do in such a short time.

Also present were the senator for the National District, Faride Raful, and other members who accompanied Lovatón in developing “The Government in the Provinces.” Along with the representatives of the neighborhoods were merchants, religious leaders, and activists.

Another locality visited was the province of Hermanas Mirabal, where the director of the National Institute of Technical Training (Infotep), Rafael Santos, and the governor Lissete Nicasio reviewed the commitments assumed last May and those executed.

Santos informed that, as part of the commitments, two Community Technology Centers have already been installed in Jamao and Blanco Arriba.

He also informed that in a few weeks, a modern technological center for professional technical training will be inaugurated in the Compin Club in Salcedo, and pointed out the importance of continuing the actions, but also of thinking about the permanent development of the Northern region, for which he committed himself, together with the community, to promote before President Abinader. This highway connects San Francisco and Santiago.

The initiative started in May.

In Ocoa, the civil governor, Oliva Castillo Aguasvivas, highlighted the investments that have been made and will be made by the government. She spoke in the Father Luis Quinn hall of the municipal town hall, together with the vice-minister of Housing and Buildings, Ney García, other officials, and representatives of local institutions and organizations.

The Government in the Provinces is an initiative that took the heads of government ministries and directorates to the streets last May to collect the needs of Dominicans. According to Paliza, there have already been 40 meetings, some of which have been held in the same province due to the size of the location.