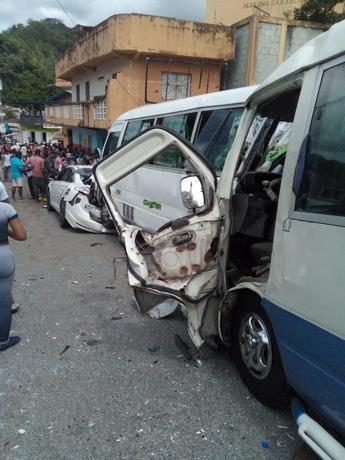 Despite the accident, no fatalities were reported; among the injured, some people were seriously injured and, according to reports, limbs had to be amputated, reminding us that in the country, deaths due to traffic accidents have been a “never-ending” issue. According to statistics presented by the General Directorate of Traffic Safety and Land Transportation (Digesett), up to June 30 this year, at least 751 people lost their lives due to traffic accidents.

From that date to date, according to the journalistic archive and data collected by the Tráfico Expreso website, approximately nine other people lost their lives due to vehicular recklessness.

One of the most recent and notorious accidents occurred on the Las Americas highway in Santo Domingo East, where two employees of the Ministry of Public Works and Communities (MOPC) died while working on the ornamentation of the road after being hit by a speeding vehicle. The deceased were identified as Rosalia Rafael Arias and Carlos Puello, approximately 50 years of age; Digesett detained the vehicle’s driver.

The accident reportedly occurred around 6:00 a.m. on the 22nd of this month. According to an agent, at that time, the accident was reported to 911; two adults and a 12-year-old minor occupied the heavy vehicle. The tail of the trailer truck fell into the Manoguayabo river.

Similarly, on the La Cuaba highway, one person was killed on the spot while the driver fled;. At the same time, in the surroundings of the municipality of Boca Chica, a man died after falling from a motorcycle on Duarte Avenue, in the so-called “Costa Blanca stretch”; the victim was a passenger on board the bike.

At the beginning of the month, in Santo Domingo East, two vehicles collided on Ecologica Avenue near Manolo Betances Street, where one person died in the direction of Hipica Avenue. According to Intrant to Listin Diario data, seven out of 10 people who lost their lives in traffic accidents were riding a motorcycle.