Tattooists say Health does not have qualified personnel to evaluate them 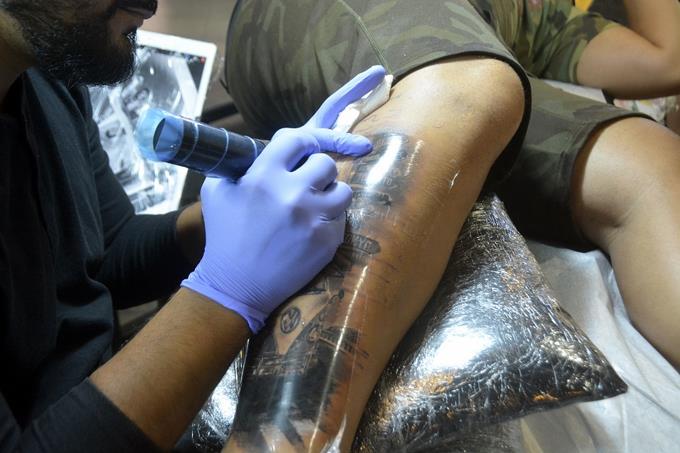 Santo Domingo, DR.
Professional tattoo artists from various companies in Greater Santo Domingo have been willing to explain and teach Listín Diario how they carry out their sanitation activities for the care of clients and their workers.

Valentin Pantaleon, the owner of Valens Tattoo, narrated his experiences as an expert in the area since he is not only a tattoo maker but also that he and his “crew” perform minimal and expansive type piercings here they take newborn babies to perform their first piercing.

“In relation to Public Health it has always been a myth and being clear there are no strict regulations, whoever must supervise one must have knowledge in the area, because they have no idea of what they supervise, tattooing techniques have been updated so much that they no longer use so many instruments, everything is disposable,” said Pantaleón, who is a professional tattoo artist.

The artist explained that sometimes some of these “supervisors” try to extort tattoo entrepreneurs, and even if they have their respective guidelines up to date, they threaten to close their businesses.

“They send Juan de los Palotes, who doesn’t even know what foot he’s standing on and in the end just wants money,” Pantaleón said.

At Valens Tattoo, you can observe the hygiene with which their collaborators carry out their designs; they have disinfectants, gloves, an insulated waste box, and each tool comes in sterilized packaging. Also, for each client the seats are disinfected, and new needles, ink and gloves are used; they also have a reception area so as not to cause agglomerations inside the premises.

“Everything has become simpler for us and the clients, we use cartridges that are mounted in the machine and then thrown away. We do not have direct contact with blood and with the piercings also everything is thrown away, there is no contact with anything, if something happens to the client we are the ones affected”, explained Pantaleón.

The tattooists were consulted about the specialists warning that their profession contributes to the spread of monkeypox.

Another testimony
At the Kocko Tattoos tattoo studio, its manager Evelin Patrocino, who specializes in shadow tattoos, goes beyond the “typical” care for tattooists since they carry out a process called electrostatic disinfection, which consists of applying a chemical disinfectant on surfaces through a particular spraying system capable of taking advantage of electromagnetic force to improve the power of sanitization and it is performed every month.

It also has sterilizing machines, and its needles are equipped with “heads,” which prevent anyone from coming into contact with them after they have been used. Instead, their needles are only propelled through the machine, after which they have a process of eliminating this material.

“Everything you put your hands on here is disinfected and covered with plastic, each collaborator has a station with their tools, before Covid-19 arrived we already had security measures, here nothing is refused, the mouth of the machine is sterilized and no ink passes through it, it is done to avoid any kind of risk, customers must wash their hands before going to the station, the risk is basically zero,” said Patrocino.

Kocko Tattoos has a waiting room and separate cubicles for each tattoo artist. Their piercings are done with catheters automatically discarded when the process is finished; the ultrasonic and hot ovens are responsible for sanitizing the instruments used.

Nathaniel Díaz, an independent tattoo artist in his spare time, specified that each artist has his own means to take care of himself and his clientele.

“I am an engineer, and this is more like a hobby and an extra because I live from what I studied; I don’t have a studio, I just go to the house of whoever asks me, and I solve it, but I don’t see a clear way how smallpox could be transmitted through a tattoo, since if it were more or less possible, it would be with piercings and not even that,” said Diaz.

At the same time, he questioned the work of the health entities, which he described as “not very competent.”

“At the time when I worked in studios, those guys only wanted money when they came to the premises, you could have yours ready, but they would pull out a dirty trick up their sleeve to get away with it and when you questioned them about what was wrong, nobody knew how to tell you because they don’t handle those situations,” said Diaz.

The professionals interviewed emphasized that they are concerned that there are currently several commercial establishments doing tattoos and piercings at low cost but with no sanitation.