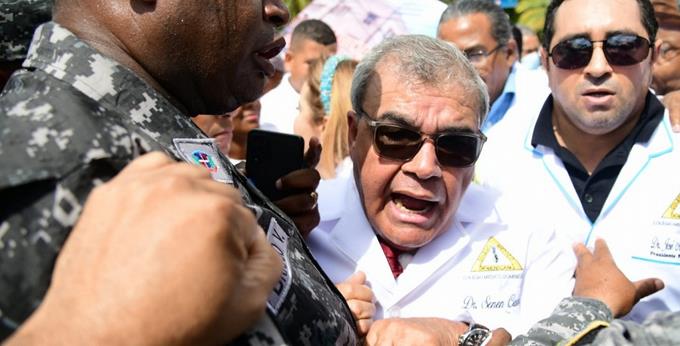 The president of the Dominican Medical Association, Senén Caba, is restrained by police forces while yesterday leading a march that was prevented from reaching the National Palace, to demand a series of demands from the government of President Luis Abinader in the health sector. Jose A. Maldonado

Santo Domingo, DR.
Members of the Dominican Medical Association (CMD), together with the National Association of Private Clinics (Andeclip) and dozens of professionals in different health areas, began a march yesterday towards the National Palace, which culminated in an abrupt attack by police forces.

Demanding a series of demands for the country’s health sector, such as the opening of hospitals, the lack of personnel, and the replacement of incentives for doctors, the president of the CMD, Rufino Senén Caba, and allied unions were approaching the vicinity of the Government House when they were stopped at two intersections.

The route initially planned by the doctors and the law enforcement agents were changed by the latter without prior warning. With the placement of metal barriers, they tried to direct the passage of the doctors to another entrance, which led to the confrontation.

With fierce struggles, blows, and shoving, the police officers tried to prevent doctors, nurses, and press members from reaching the Palace, resulting in physical injuries to two former directors of the CMD, as well as to camera operators and journalists.

When they were prevented, the leaders of the health community who were in front of the march arrived against the metal gates; eight of them managed to reach the front of the government headquarters, where a second and more aggressive confrontation took place.

The president of the College fell during the dispute, while other participants and journalists from different media were beaten and pepper sprayed.

CMD reaction
At the end of the march, Caba described as “aberrant” the reaction of the police officers to the association members. Nevertheless, he said that he and the other members of the CMD peacefully went to the National Palace.

“This action is unspeakable, we were subjected to mistreatment and humiliation. The doctors, colleagues from the press and civil society who accompanied us came on a peaceful, civic, orderly and duly informed march,” he said.

Call for today
The doctor summoned the CMD today at noon to make an official pronouncement of the incident and respond to President Luis Abinader.

“Let the president get ready, that tomorrow (today) we will give him the response he deserves. We will assess the situation created in the face of the deafness and mistreatment of a government that obviously does not want to resolve the situation for the poor.”

He emphasized that the union is not asking for a salary increase but for improving the health conditions of the less privileged citizens and that it will not accept that the government mistreats them in a “savage” way.