Traffic fines have skyrocketed in the last two years 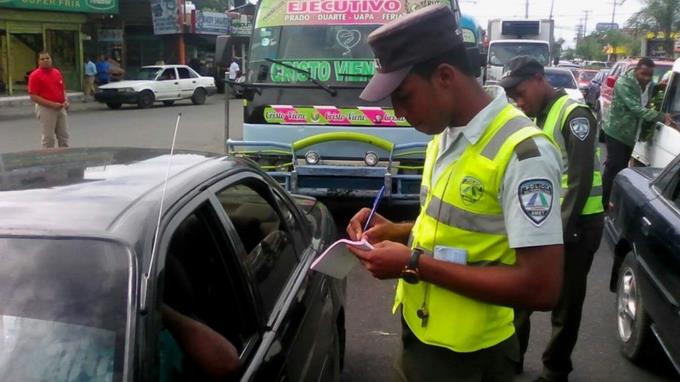 Santo Domingo, DR.
Between 2017 and June 2022, the infraction processing department of the General Directorate of Traffic Safety and Land Transportation (Digesett) registered 5,920,860 fines, of which 2,520,996 were applied in the last 18 months.

Similarly, the statistics allow identifying how the number of transgressions registered and sanctioned increases with the passing of the years, only except for 2020, the popularly called “year of the pandemic” of Covid-19, and in which the Dominican Republic, like other countries, restricted the mobility of citizens.

The most frequent
Of the 5,920,860 fines applied in the aforementioned period, 1,524,566 correspond to failure to wear a helmet while driving, 523,821 for disrespecting traffic light signals, 485,678 for not carrying a license or having it expired, another 422,651 for not having insurance or having it expired and 404,258 for ignoring the use of seat belts.

Likewise, 113,568 and 101,917 were applied for exceeding the maximum speed limit and not having a license plate, respectively.

Zones
The zones that concentrate the highest number of these sanctions for non-compliance with Law 241-67, 63-17, and the regulations of the National Institute of Transit and Land Transportation (Intrant) are those of Greater Santo Domingo and provinces such as Santiago, with 315,841 tickets registered; La Vega, with 104,739; and Puerto Plata, with 86,150.

Not everything is audited.
Even though the figures are growing, dozens of infractions in the country are overlooked.

On this matter, the director of the Digesett, General Ramon Peralta, informed a few weeks ago that the members of this institution “are not enough” to fulfill all their functions.

Peralta revealed that the 3,922 members that form part of the institution are insufficient for the efforts that must be made to control traffic and that, he calculates, an average of 10,000 new agents would be needed.

Transgressions
The statistics allow to identify how the number of transgressions registered and sanctioned increases with the passing of the years, with the exception of 2020, the year popularly called “the year of the pandemic” of Covid-19, and in which the Dominican Republic, like other countries, restricted the mobility of its citizens.

And absolutely no enforcement…just writing tickets. They know this is an easy way to collect money, given the everyday habits of most Dominican drivers.

Maybe they can spend some income of that to put half cannonballs at the intersections here in Punta Cana, where drivers attempt to make 4 lanes out of 2 and put everyone at risk as they try to merge. Those who drive here know exactly what I am talking about. Maybe put up a few “STOP” signs as well.

The intersection at Los Manantiales connecting Veron to the Blvd Turistico del Este is where the three lanes at the lights: two forward and one for a left turn, are magically turned into four lanes. Violators add the use the breakdown lane without the cannonballs to dodge the lines of backed-up vehicles in the three proper lanes that are waiting for a green signal. They bully other drivers at green to merge and jump ahead. A greater portion of the persistent violators are the transport buses, vans, and jeepetas going to/from the airport. They also will use the right exit ramps at the intersection to exit, cross over to the on ramp to avoid the lights. It seems the only time Digesett is there is after an accident.

This article provides the basic information. Why don’t they go further into why the tickets have increased? Or whether there some irregularities in enforcement.

I use the SD-Samana highway at least twice a week, and have concluded that that highway was designed to fine people. 80kmh? No passing lanes? In short, that highway is a money maker for the state.

Straling from our people, thanks you to all these illegal gringhoes Americans living in our country turning us into a police country.

Who are these illegal gringos you speak of?