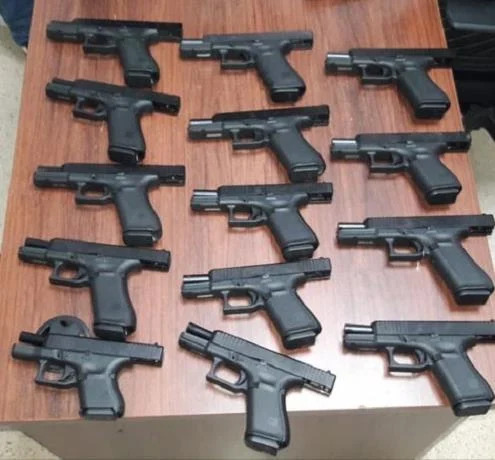 Santiago, DR
A man was apprehended on Monday with a shipment of illegal weapons during one of the raids carried out in several sectors of the province of Santiago by members of the National Police and representatives of the Public Prosecutor’s Office.

The man was arrested in an operation in which Customs agents also participated, and 14 Glock pistols were seized.

Maicol Campusano, also known as “Jaelmer Alexander Vargas Rodríguez,” was apprehended in one of the interdictions of the authorities in the Ensanche Libertad of the northern city.

According to preliminary reports, Campusano had illegal firearms in shipping boxes of clothes and household appliances from the United States.

For these raids, the Dominican authorities had the cooperation of the Homeland Security Investigations (HSI) of the United States.

The Santiago Prosecutor’s Office will file charges against the accused for international arms trafficking in violation of Law 631-16 on the Control and Regulation of Arms, Ammunition, and Related Materials.

In the next few hours and after concluding the primary compilation of evidence, the referred judicial body will present before a competent court the detainee, against whom it will request that preventive detention be imposed due to the seriousness of the charges.

Free him. Everyone should have the right to own and possess a firearm!