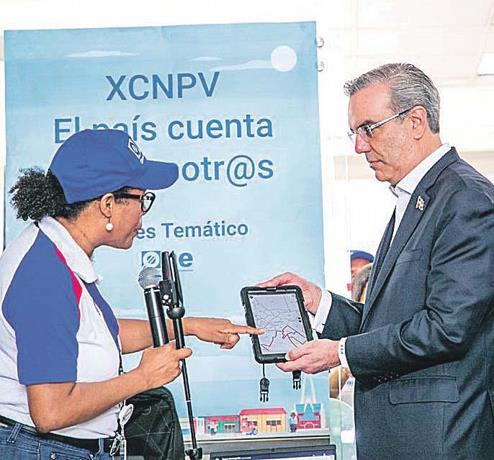 Santo Domingo, DR
The Tenth National Population and Housing Census will be held from November 10 to 23 this year after its execution was suspended in 2020 due to the incidence of the coronavirus.

During an act headed by the President, Luis Abinader, the director of the National Statistics Office (ONE), Miosotis Rivas Peña, in the company of the Minister of Economy, Planning, and Development, Pavel Isa Contreras, affirmed yesterday the execution of the census for 14 days.

The census will have an investment of RD$3.6 billion, as specified by President Abinader during his speech, after adding that the “latest technologies” available are going to be used to have the information as quickly as possible and that it will be an effort that will have many positive repercussions.

“This is being done with the help of international organizations, with the best technology available and imitating successful cases of other countries and with all the professionalism, so that the people and all government and civil society institutions have the data and information, the real statistics of what the Dominican Republic is in 2022,” he said.

The president issued decree 420-22, which orders the census to be carried out. However, it also instructs that all public and private activities will continue as usual during the execution period; that is, it does not imply that citizens will have to leave their jobs.

While Rivas Peña detailed that in the first quarter of 2023, at least the results of the population by sex and by the province will be ready. He explained that at least 10.5 million inhabitants are projected.

In addition, some 35,000 people will be on the streets to collect the country’s population data. He also showed the head of state the official clothing and the technological equipment that those in charge would use to avoid fraud.

He explained that the personnel assigned to the different localities would insist as often as necessary in the homes where they do not have answers when they go for the first time.

In 2010.
The census was scheduled to be held in 2020, but it was not possible due to the incidence of the coronavirus. As a result, 2010 was the last time it was carried out for seven days, with approximately 9.5 million inhabitants.

Finally Is about dam time