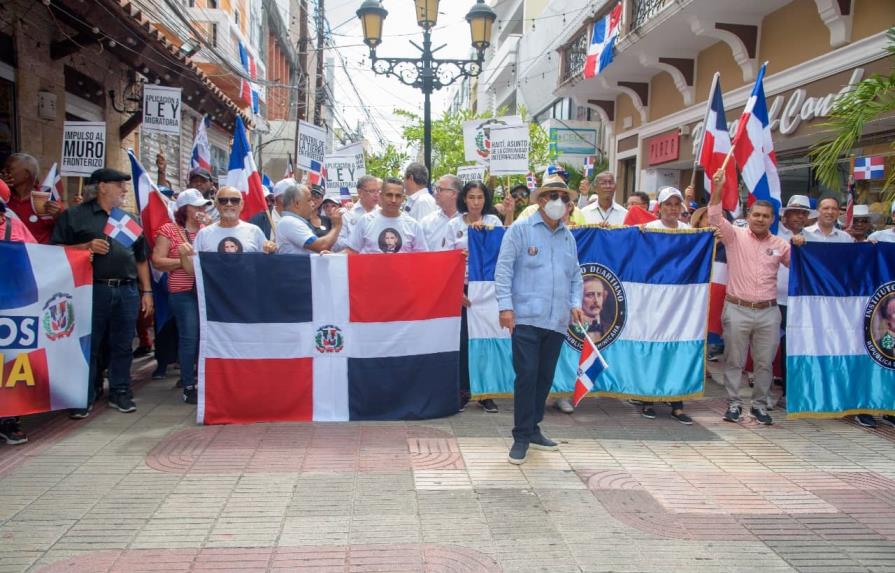 Wilson Gómez, president of the Duartian Institute, was in charge of the main speech. ( FRANCISCO ARIAS )

A crowd marched this Saturday from Columbus Park to the Altar of the Homeland in response to the call made by the Instituto Duartiano to demand that the international community act in response to the socio-political crisis and violence in Haiti.

Shouting in unison the slogan “Dominicans are brave” and holding signs reading “UN, solve your mess in Haiti” or “Dominican nationality is not given away,” the participants in the “DR Patriotic March” waved the tricolor flag during the march along El Conde Street, in the Colonial Zone.

According to Wilson Gómez Ramírez, president of the Instituto Duartiano, “this patriotic meeting today should be considered as the start of a great movement in defense of the Dominican Republic, of active, orderly, legitimate and legal resistance.”

“Haiti has painfully become a failed state, collapsed, disintegrated, and above all, most sadly and unfairly, evicted and abandoned by the international community, especially by international organizations: United Nations (UN), Organization of American States (OAS), as well as the United States, France, and Canada,” said Wilson in his keynote speech.

Gómez Ramírez appealed that the rescue and reconstruction of Haiti must be done “in Haiti” and recalled that, after the devastating earthquake of 2010, “the Dominican people demonstrated to have a noble, dignified, generous and compassionate heart.” 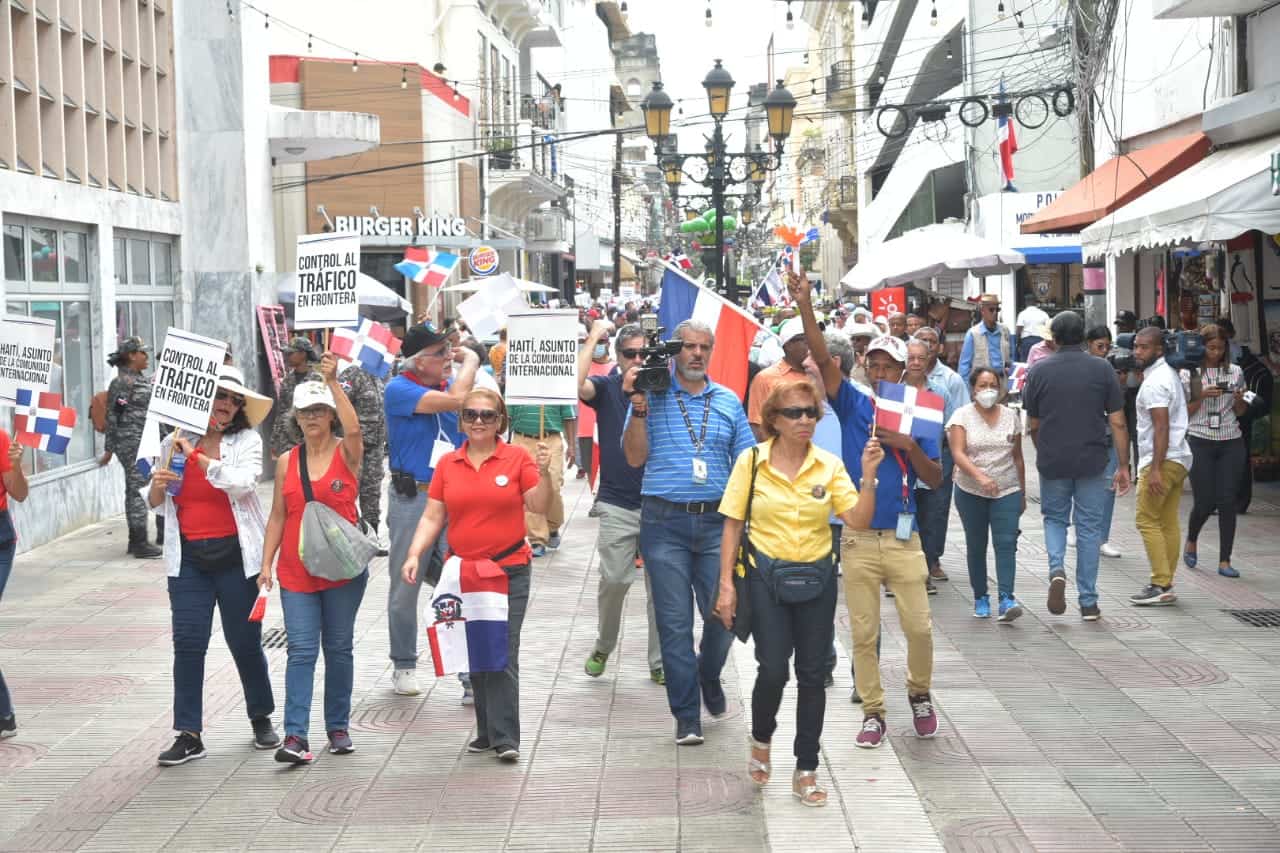 Some of the demands of the Instituto Duartiano include the speedy construction of the border wall initiated during the current administration; the rigorous application of the Labor Code, which establishes a minimum of 80% of Dominican labor in the economic activities of the country, as well as the compliance of the migratory regulations, the sustained repatriation of all foreigners in illegal or irregular migratory situations.

The demonstrators also requested the revision of the Civil Registry and the Foreigners’ Book and called on the people to defend sovereignty.

Among the figures who participated in the mobilization were Senator Antonio Marte and former Minister of the Armed Forces José Miguel Soto Jiménez.

There were thousands of people not dozens… Basta de manipulacion….

It is important not to be angry at the Haitian people. Be angry at the inaction by the United Nations, the U.S.A. and Canada .They should be sending in peacekeeping troops. A friend’s brother was kidnapped last Monday in Port au Prince. The gang Sucretradores members are demanding $50,000 usd. The young man is 24 years of age . He is from an average Haitian family. The mother is frantic. They do not have that kind of money !

The international community is not going to get involved anytime soon to resolve Haiti’s problems. It would take another huge earthquake to import foreign troops into the country to at least bring about an appearance of order.

I really hate the stiff norms of international politics about sovereignty that can deny help to peoples who need help.

Just wonder what would happen if Haiti had an all white population?

They would all be vaccinated with the kill shot if all white!

The Haitian crisis is creating a massive exodus of Haitian that are trying to flee that country. This is affecting the entire region, but the first country to be affected ins the Dominican Republic. All of this while the US, the UN and the international community turn a blind eye.

The mass exodus can be stopped at the border. There are 11,000 troops there. If the government really wanted to slow or end the movement of Haitians into the country all it has to do is seal the border. Yet, it does not seal it because Haiti is the RD’s number 2 trading partner ranked after #1 USA. The revenue earned from trade takes senority over exodus concerns. Money talks while Haitians walk.

I am a 45 year resident missionary in PaP; the International Community led by US Ambassador Sison created this nightmare by appointing an implicated assassin as Prime Minister following the brutal assassination of President Jovenel Moise. For 6 years prior to President Jovenel’s assassination Haitian oligarchs accustomed to corrupt politicians who awarded them lucrative government contracts and accepted millions in kickbacks, these unconscionable men hated President Jovenel for breaking up their taxless monopolies and actually developing electricity and roads. They couldn’t bribe Jovenel so they hired mercenaries to kill him. Now the destabilization that oligarchs instituted to convince the International Community that Jovenel was defacto, those armed militias are kidnapping, trafficking and terrorizing 11 million Haitians at the bequest of the oligarchs and the politicians associated w them. The only solution for Haiti is the intervention of foreign troops to disarm and disband the gangs. Don’t believe the disinformation rhetoric that the Haitian population does not want a military intervention, the only one that benefits from the continued destabilization are the politicians that US Ambassador Sison appointed and facilitated a coup d’etat of a beloved President who won three elections.

You can lead a Horse to water, but you cant make it drink it” what sence does it make to bring the international community in, if the Haitians continue to Robbed and steal and be a dysfunctional society going on 100 plus years since they paid off that debt to france and gained their independence. The Ngo and all charitable gtoups were there for a decade helping the Haitians during their Earthquake catastrophe” and nothing change but more corruption and criminal behavior on their part.