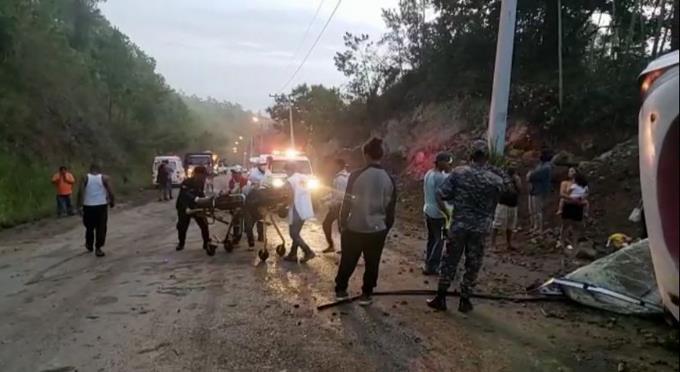 Firefighters and Civil Defense volunteers participated in the rescue operations.

Yesterday afternoon, two young men died when the motorcycle they were riding collided with a truck on the Federico Basilis highway.

The report provided by the colonel of the Buena Vista municipal district fire department, Pablo Joel Pimentel, states that the driver of the truck suffered some minor injuries and that the cause of the accident was brake failure.

Also, in the stretch known as Bajada de Gurabao, between Valverde and Santiago Rodríguez, one person was killed and another injured in a traffic accident. The mortal victim was identified as Robert Enrique, 43 years old. The injured is his minor son.

They did not arrive at their resort.
At 5:20 yesterday morning, what should have been a pleasure and enjoyment trip for a group of teachers and their families, ended in a traffic accident on the Federico Basilis highway.

The group of teachers and their families, 60 in total, left the municipality of Jarabacoa for Bávaro, La Altagracia province. But, according to the La Vega relief agency report, the bus suffered a brake failure as they headed south-north.

Claudio Acosta, who was driving the accident vehicle, narrated the odyssey he experienced after realizing that the bus had broken down.

“When I realized that there was no brake, I tried to control the vehicle towards a safe place, but I could not,” explained the driver. Sixty people traveled in the vehicle, 53 adults and the remaining children.

According to reports, at least 14 people were injured and taken to the Luis Morillo King hospital in La Vega and other health centers.

Three years.
Between 2017 and March 2019, at least 33 traffic accidents involving light and heavy vehicles were recorded on the Jarabacoa-La Vega stretch of the highway.

Fatalities.
According to periodic records, these eventualities have caused at least 23 deaths and nearly 30 injured.

May the dead RIP and the injured recover soon.

Any vehicle taking the Jarabacoa – La Vega road must have good brakes. This operator does take the convenience to stop and check his brakes for the overheating when descending steep mountainous roads, overheating that can cause failure. Unfortunately, many operators in this country rely more on God to protect them on the road rather than themselves.

Those motoconsho riders died the same way they behave like jackasses” too bad Dominicans are to angry and blind to see they live darkness, maybey if they cant forgive their mothers for failing tbem alive” they can maybe drop the Anger🤔