80% of stroke survivors are left disabled 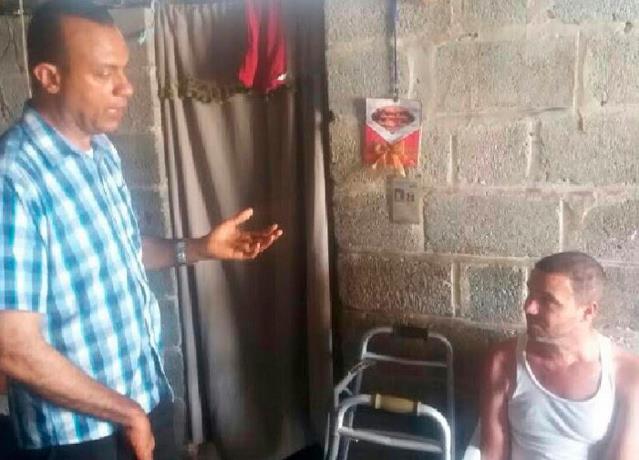 The journalist Feliz Vinicio Lora, during education and prevention sessions carried out by the Dominican Brain Accident Foundation, of which he is president.

Santo Domingo, DR.
Around 80% of the people who survive a Cerebrovascular Accident (CVA) are left with sequelae or disabilities that affect their daily life, while the average cost of a citizen who suffers an event of this nature is between 2 million 300 thousand pesos and 3 million 500 thousand.

Some of these disabilities can be seen with the naked eye, but the main ones left by these events are not seen, although they are perceived by those affected, their relatives, and the people around them.

This is precisely what led to the creation of the Circle of People with Disabilities due to stroke, in which some 623 stroke survivors are registered.

This was explained by the journalist Feliz Vinicio Lora, stroke survivor and president of the Dominican Stroke Foundation (Fundacion), in an interview for Listín Diario, where he also gave details of the launching of the awareness campaign “Disability due to stroke also counts.”

Main sequels
He explains that stroke is one of the diseases that leave more permanent sequels in the person, being the most frequent the motor or physical, leaving some bedridden; of the language, written or spoken, among others; Intellectual, which can be mild, moderate, severe and cognitive deficits, such as memory, attention-concentration, planning, and thinking.

Also, adds Lora, there is a large percentage of survivors who are left with emotional disorders, such as depression, anxiety, change of behavior or temperament, which becomes a limiting factor, often forever, and which must be controlled with medication, in addition to problems with vision, hearing and interactive bladder.

Increasingly more and more young people.
The president of Fundace emphasizes that previously it was established that the cases of stroke occurred in people after 55 years of age, but that has been changing, with the entity having members between 18 and 45 years of age, in working and school age.

He said the foundation organized the Young Stroke Volunteer Network five years ago with the slogan “Young people also get strokes.”

He explained that before the pandemic, according to the Dominican Neurology Society, stroke cases were around 19,000 yearly and are now over 24,000 yearly. “That translates into the large number of cases that come to us, approximately 30% more,” he said.

From two to three million
He says that hospitals should be provided with thrombolytic drugs. This medication can reduce the after-effects, and pointed out that the average cost of a citizen who suffers a stroke is between 2,300,000 pesos and 3,500,000 pesos.

In addition to this, he said, the Dominican Republic lacks a cognitive rehabilitation center, making the patient’s recovery more complex. Furthermore, people with disabilities due to stroke are not counted in the Census or the National Council on Disability (Conadis).

Prevention and care
The best medicine is preventive, and without education, there can be no prevention, said Lora. Therefore, he proposed the “Alianza-ACV” project to design an integral prevention policy involving the different sectors.

He said that in no health center, private or public, there is a protocol when a person arrives at the emergency room with a stroke.

Sensitivity campaign
“Disability due to stroke also counts” is the awareness campaign recently launched by Fundace. It consists of five fundamental axes that “are inclusion, rights, accessibility, and non-discrimination, to enable greater visibility of people with disabilities due to stroke.”

The campaign seeks to humanize and, simultaneously, alert the State, the private sector, and the population not to exclude people with disabilities due to stroke/CVA.

As an example of how such an event changes lives, Lora told this story. “I will give you the case of a 35-year-old person who suffered a stroke at 30. He was middle class, studying and working.

He had difficulty walking and speech impairment. After a year, he was suspended from work, and since he suffered the stroke, he has never returned to school.

Not only does it change his life but also that of his entire family, mainly those who live with him, since they were left without economic resources without health insurance.

Five years after the event, he suffers from depression and is in a wheelchair. In short, to any person who has had a stroke, their life changes; that life, as it was before, will not be the same.

Statistics of the USA indicate about 65% of stroke victims as disabled. The US does have better and quicker access on average to emergency care in the event of a stroke. This access lessens the risk of severe disability for some.

The lack of sufficient oxygen causes stroke, the brain cells die. The administering of oxygen soon after a stroke slows or stops brain cell death. US ambulances and professional first responder crews always have oxygen nearby. Not so in the RD, sometimes no ambulances, no 1st responders, no medical help of any kind for immediate 1st aid. These deficiencies are most possibly some elements of the 80% disabled number for the RD.