The coconut plantation of Nagua, the coconut capital of the Dominican Republic, because it has the largest amount of planted coconut. bald albert

SANTO DOMINGO -The coconut is not native to the Dominican Republic, and neither do we have it in abundance in the country. However, it is often thought that it is, especially when you go through areas of Samaná or Nagua and see large plantations in elevated areas.

Although it may seem incredible, none of the above is correct because the coconut is not Dominican, and neither in the country do we have enough quantity to supply the needs of the market with the different products obtained from this fruit. 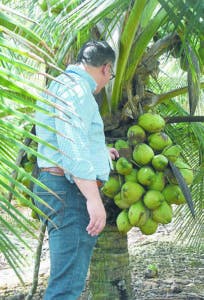 A dwarf coconut plant produces up to 180 units per year.

It turns out that the coconut comes from Africa, and it is registered that they brought it in the 16th century, in the year 1543. Still, in those times, it was not an important crop in the colony, and it was in the time of Trujillo when it was given more importance along with the realization of the potential of the export of coconut oil.

Then the Dominican Republic became a significant exporter of coconut, not because of the volume of production but because of the facilities to place it in international markets, so it reached Europe and the United States.

Coconut was of great importance in the islands of the Greater Antilles, which produced and marketed it until a plague called lethal yellow affected it significantly.

Today, in the entire American continent, only Brazil processes more coconut than the Dominican Republic. It is here where the best industries and the best technology are. Still, industrialization goes much faster than the field, so they have been forced to import from other regions, Guyana being the leading supplier for the local market, says Horacio Lomba, executive of the Rica group, and that in Guyana they have a lot of coconuts, but do not have industries, while the Dominican Republic is the opposite, has many sectors, but not enough coconuts.

By that nearby route comes 79% of the coconut produced in Guyana, which is processed and then goes to the United States, but this has a disadvantage because, although so far it has been good, there is a risk that if someone major is installed on that island, the local industry will have problems.

In addition to Guyana, coconut is also brought from Africa, Vietnam, and other countries, to be processed here, which increases the production price. This is because, apart from the fact that there is not enough coconut in the country, producers cut them early due to the shortage, making it less complete. After all, it has less fat.

Due to the lack of coconut, the industries that process them in the country must bring more than 25 million units each year from other countries.

Problems of the sector
According to Horacio Lomba, several problems in the country affect the local industry, and among them is that most of the plantations in the country are over 50 years old, to which is added that they were planted in high areas, which also hinders the supply of demand because few want to go to harvest it in those places.

But there are also pest problems because there is no sanitary control in the country, and most of these pests are in places that belong to small producers who will not invest in sanitizing the bushes. There is also no culture of fertilization of the plants because people have bushes in the yard and only harvest them.

Another problem is that there is no incentive for financing, although FEDA and Banco Agrícolas are already working on a project for planting.

There are many coconut trees in coastal areas, but when they become tourist areas, they are not used because the fruit is cut to protect tourists.

Lomba explains that the Dominican Republic’s processors and exporters lacked the vision to plant in time. Today, competition in the international market is greater, and exports have decreased considerably.

25 Million.
Units of coconut are imported annually into the country to supply the local market demand.