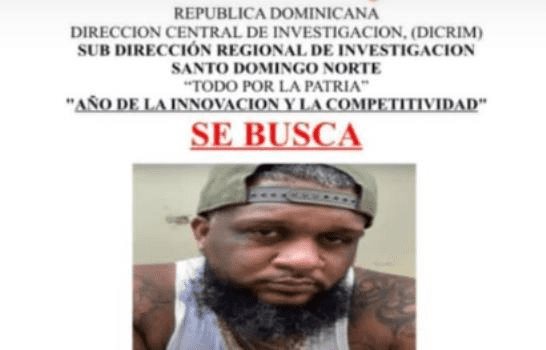 Santo Domingo, DR.
“When the police killed him, he was going on a trip to Puerto Rico,” said María Lantigua, wife of Víctor Manuel Montilla (El grande), who was wanted after killing a married couple in Villa Mella.

The young man’s wife killed by the police last Friday said that he took part of his belongings and 160,000 pesos to go on a planned trip.
The young woman said that Montilla was a great man but that he was filled with anger when he killed the married couple Alberto Frómeta, 30, and Alexandra Guzmán Rodríguez, 25, in the neighborhood of Los Platanitos de Villa Mella.

According to Lantigua, the man, her husband killed had tried to mug him months before and told him, “look at this one with chains and gold rings and he works as security in a discotheque.”
The relatives of ‘El Grande’ defined him as a quiet and hard-working man who always acted reasonably, so they cannot explain what went through his mind at the moment of killing a married couple.

Another perspective
Luisa Lantigua, the mother-in-law of the deceased, said that he was sorry for what he had done and wanted to turn himself into the National Police.

The lady added that at the time of committing the criminal act, ‘El Grande’ was “used by the devil.”

“Every time he talked to me, I told him, my son, turn yourself in even if it is for the press, but he was afraid that the Police would kill him,” said Luisa.

The last time Luisa spoke with the deceased was to give him the sum of 80,000 pesos hours before police officers killed him.

“I have nothing bad to say about him, because he was a very good person, a working person who, if he wanted to put fried food right there to get his money, for his food, he did it. If a people needed something, ah, look, he made it easy for them too,” the lady quoted.

Luisa said the 32-year-old man was dedicated to lending money and charging interest.
Relatives of the deceased say that at the time of his death, the young man had in his possession a sum of 190,000 Dominican pesos and several gold items which have not been handed over to the relatives.

Death
On Saturday, the National Police reported that “El Grande” was killed when he and another man confronted a patrol of the institution following him to apprehend him.

National Police spokesman Diego Psqueira said that the fugitive had two firearms he used to shoot at the police officers in his possession.

El Grande’s remains are being viewed at the court of the La Piscina sector in Los Guaricanos. His remains will be buried at 10:00 a.m. this Monday morning.