A string of criticisms and praises for Abinader’s speech 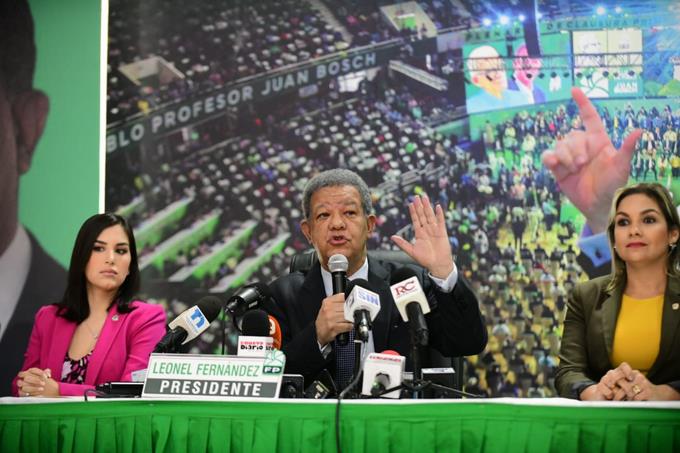 Yesterday, the president of the People's Force, Leonel Fernández, harshly criticized "the number of punctures, exaggerations and unfulfilled promises" of the Government. DAILY LISTIN ARCHIVE

Santo Domingo, DR
As soon as President Luis Abinader’s speech on his second government report was finished last Tuesday from Santiago, a round of criticism and praise from the opposition, business entities, religious entities, and opinion figures was unleashed, throwing heat into the debate and establishing dominion as the basis of discussion in public opinion.

The most definitive response was issued by former president Leonel Fernandez, leader of the Fuerza del Pueblo (FP) party when he defined Abinader’s administration as “two years of government with a lot of foam and little chocolate.”

This, according to Fernandez, is due to “the number of punctures, exaggerations and unfulfilled promises” that have predominated during the current administration.

Fernandez affirms that the Government of the Modern Revolutionary Party (PRM) has been characterized by the “syndrome of the pitfalls and works not carried out,” referring to the amount of road infrastructure announced by the President in different parts of the country.

“This can be seen,” said Fernandez, “by evaluating that the government has promised some 223 works throughout the national territory, with a projected investment of 452 billion pesos.”
Among these he mentioned the entrances of Samaná and La Romana, Manzanillo and the ring roads of Navarrete, Francisco de Macorís, Azua and Baní.

He criticized that Abinader announced 62,000 housing solutions but, to date, “the State has only delivered 28,000, of which 215 homes have been distributed between Los Alcarrizos and Azua.” After recalling that the President promised to build an oncology and trauma network and the construction of three health centers in Santiago, San Cristóbal, and San Francisco de Macorís, these works have not materialized, and “many public hospitals have fallen into disrepair.”

“Snatching hope”
The Dominican Liberation Party (PLD) declared through its secretary general, Charles Mariotti, that the government of Luis Abinader and the PRM are “snatching hope from Dominicans.”

“The famous change that they proclaimed so much has been backward. Today people are beginning to say it everywhere: Abinader’s change was a failure,” he expressed.

“A theatrical play.”
Meanwhile, Abel Martinez, mayor of Santiago and presidential aspirant of the Dominican Liberation Party, described the President’s speech as “a theatrical play” and “with a prepaid audience, where he did not address national problems.”

He criticized that the President did not talk about food prices “nor about a concrete plan to combat the delinquency sweeping” the country.

“Unaware of reality.”
Former Vice President Margarita Cedeño maintains, through her Twitter account, that the President’s speech is “completely oblivious to reality.”

She said she would like the President to talk about economic bonanza and social welfare, “looking into the eyes of families who cannot afford to eat, the sick without access to medicines and children without school lunch.”

“Hopeful, a challenge.”
For its part, the Dominican Council of Evangelical Unity (Codue) described it as “hopeful” and, at the same time, “a challenge,” the speech of the head of state.

Pastor Feliciano Lacen considers that the President showed a comprehensive work program that commits him to continue investing directly in the health, food, and education sectors.

This will allow him; he added, “to continue working to solve the deficit of classrooms, expand the coverage of public education and finish the educational centers that are under construction, recognizing that this is often caused by the migratory scourge that threatens our people.”

The Codue considers that the government should address the problem of citizen insecurity and unite the different sectors of society to efficiently confront this problem which is gaining ground in the country every day.”

However, the Council warns that, even if Abinader’s words are motivating and hopeful for many, “it is evident that the government must move from words to deeds.”

Comparison
Leonel Fernandez also compared the costs of works built by past administrations with those the President plans to build at a lower cost.

In response to this, he said that it is “a gross manipulation” to confront works done and in operation with those that he (President) has in his head.”

“It is a gross manipulation to compare works that are built and in operation with those that are not fulfilled; it is about the difference between myth and reality,” the former President commented on Abinader’s speech.