Clay soils cause subsidence and landslides in Santiago 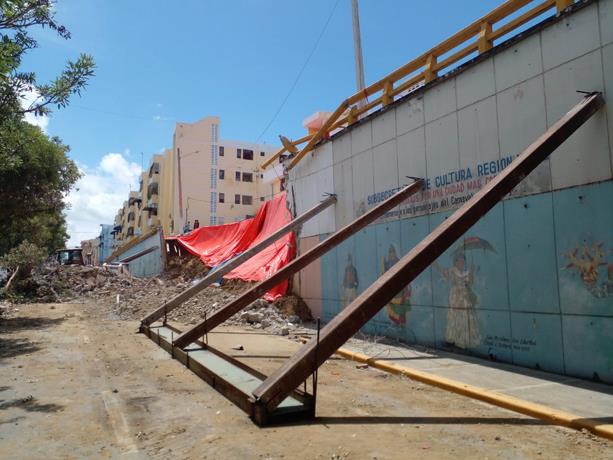 The authorities carried out evaluations of the structure to find out how the terrain behaves and seek the necessary technical solutions to restore the affected area.

Santiago, DR
The landslide registered in Las Carreras Avenue, as a result of the heavy rains that fell in Santiago last week, explains in the clay rock found in a significant part of the city’s heart.

This same explanation also serves to understand the sinkholes and landslides registered in the last years in the referred province.

The explanation comes from geologist Osiris de León, who points out that the city is built on calcareous clays in all its northern half, in all its eastern and western zones, as well as on friable silty shales in its southern strip and on stratified shales that can be observed in the cliffs on the left bank of the Yaque del Norte river.

“The main cause is that many times when it comes to building in Santiago they want to do the same as in Santo Domingo, and the capital has a good quality limestone rock that can be cut vertically and will not collapse, but Santiago does not have limestone rock, they have a calcareous clay,” he explained.

When speaking of “calcareous clay,” the geologist refers to what is commonly known as “yellow soil.”

This type of soil has characteristics that no other material in the earth’s crust has and is the sponsor of the disasters that have occurred.

De León refers that the risk of landslides is lower when there are rocks of good quality, without fractures, because lithification allows a massif to work in a monolithic way, as is the case of the cliff of Cayetano Germosén Avenue, located just below the Mirador del Sur park in Santo Domingo, which does not collapse.

“Many landslides would be avoided if deep excavations were executed taking into account the angle of internal friction of the materials or by placing lateral support protection when the excavation is vertical, and draining the interior of the soil mass with a French drain or slotted PVC pipes,” he says.

In the case of slowly subsiding soils, he recommends stabilization by cutting the ground with a suitable slope, interior drains with French drains, and perimeter drains with trenches filled with granular materials.

Rock inconsistency
The expert explains that the inconsistency of these rocks is responsible for the fact that in the presence of humidity, it degrades and loses their resistance, becoming almost like soil, which must be taken into account when digging vertically because, on the first day, it behaves like a good quality rock. But, on the second day, it degrades and can collapse due to the high humidity caused by the climate.

He pointed out that this is what happened approximately three years ago when a hotel was being built in the monumental area. “A deep vertical excavation was made that was 13 meters deep and collapsed due to the softening of the shale, causing the death of six men working on the construction,” he said.

He said another collapse occurred a month ago in the sector of Los Salados when an excavation collapsed and buried three construction workers, who were rescued in time and could survive.

Additionally, in two localities located to the north of Gurabo, Palo Quemado and Palo Alto, large landslides have occurred for decades, blocking a tourist road and destroying many houses.

De León mentioned that almost two decades ago, the entire southern slope of the Septentrional mountain range collapsed in the community of Carlos Díaz de Tamboril, northeast of Santiago, the largest landslide ever occurred in the Cibao.

As a result of this event, no house was left standing, but there were no human losses because the people left their houses in time.

The clay that is the protagonist of the soils in Santiago is a soft material, prone to be molded, and simulates to disappear in the presence of water; however, when the liquid rests, it saturates.