Hardships described in different neighborhoods of the capital city 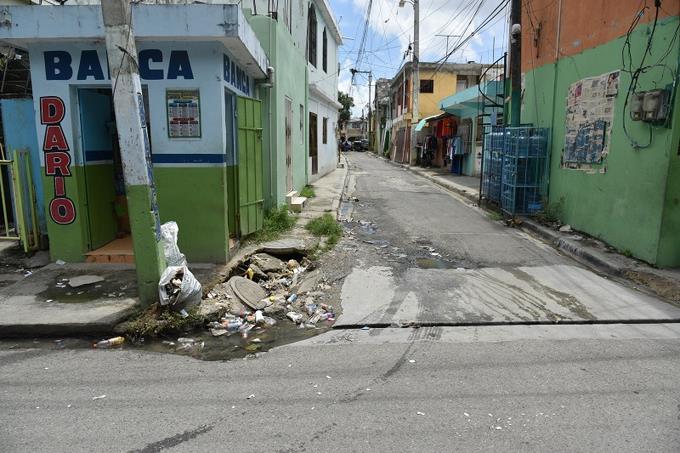 The narrow, deteriorated streets, without a regulation of the fluvial waters, is a degrading reality shared in common among the peripheral neighborhoods of the city of Santo Domingo.

Santo Domingo, DR.
Based on a study carried out by the Dominican Institute of Integral Development (IDDI), and based on data that identifies the 18 Santo Domingo districts with the highest levels of poverty and criminality, Listín Diario made a tour through some of these human settlements.

María Auxiliadora Neighborhood
In this neighborhood, where just walking through its streets, one can see the reflection of its needs, insecurity, water, and other shortages and difficulties, making the life of the neighborhoods difficult.
There, the neighbors affirm that they have had more than a year without water and that, despite making approaches to the authorities, these turn a “blind eye.”

“We rent the water, there is a lady who made a submersible pump and sells the water for 300 pesos per hour, you connect your hose and it fills up,” said José Miguel.

When asked about security in the area, José said that thieves do not have schedules to carry out their misdeeds.

“This is at all hours, one day the police make a couple of rounds, from allante, and they no longer attack with knives, this is directly with gun in hand; if you walk around with nothing, they hit you, and if you don’t want to give what you have, they also give you your bullet,” added José.

Other community members consulted reported that they have more users of harmful substances than sellers.

“Here, (from) marijuana you have to suck the smoke even if you don’t smoke; it’s a fumadera on every corner, above villegas and everyone who comes along,” said María Martínez.

Their faces crumble between the damp walls, just like their unfulfilled promises.
This is one of the neighborhoods with more drinking establishments than churches or schools. Its dwellers say the drug spots “breathe down their necks.”

“Drugs are more easily obtained than food; between those who sell, those who use and the muggers it seems to be the daily bread, and look at this piece is one of the softest that Capotillo has,” expressed Julian Mieses.

Along with Julian was a group of friends who, when contacted, alleged that part of the ills afflicting their community is due to the fact that most of the young people in the sector are unemployed and with low schooling.

“Look, you go into a job and the boss after three months already wants you out,” he criticized. Aseguidas wonders “how do you ask people who are working not to starve to death; that’s where the other things come in, since the kids nowadays are not interested in studying, what they want is to be chiperos or dembowseros to get quick money,” said Ángel Carmona Bueno.

He considered “worrying” the number of underage girls in a state of gestation.
“They don’t allow themselves to raise these girls; as soon as their lemons grow, and sometimes not even that, they already have a boy in their mouths, and this causes problems and poverty, they usually give birth to another contemporary with them,” said Francisca Rosario.

This is what happens when a Governments only concern is about Hotel Booking and Flights on the “North Coast”…I say let all the people from Cristo Rey, Capotillo and Gualey (etc) come to Sosua, Gaspar Hernanadez and Samana. After all it is there country

Politicians should realize that with these types of neglect, they are creating a perfect storm of mayhem. Very soon it will be difficult to contain and the country will become crime ridden. Think about our future!!!