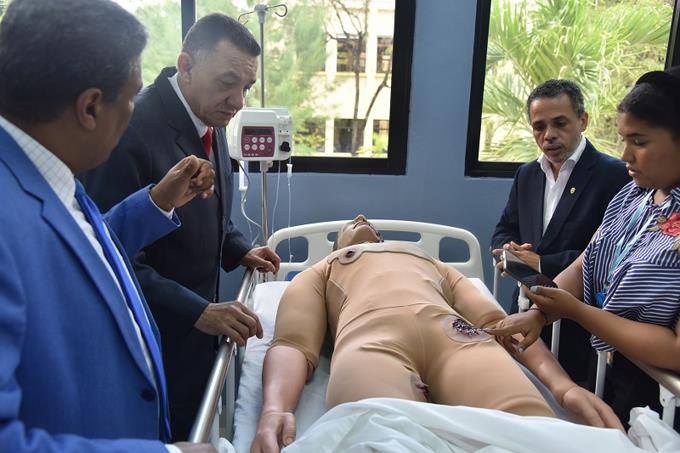 The team of doctors, under the guidance of the dean of the Faculty of Health Sciences, Dr. Mario Uffre, robs one of the mannequins that are presented as if they were human beings. jorge martinez / daily directory

Santo Domingo, DR
The Autonomous University of Santo Domingo (UASD) has a Simulation Center, which will update the medical vanguard at the national level and take surgical and practical technologies to a previous experience before contact with patients.

Those in charge of this department are doctors Franklin Gómez Rivas and Ruddy Engracia and, under the orders of the Dean of the Faculty of Health Sciences, Dr. Mario Uffre. However, it was created during the administration of Emma Polanco and Rosel Fernández.

This broad spectrum is divided between low, medium, and high fidelity devices and is in charge of measuring the technology and materials used to create the “robots” and their interaction with teachers and students.

The first room with the enclosure is qualified as low fidelity; this has devices that help with actions of Cardio-Pulmonary Resuscitation (CPR); these mannequins are presented as if they were human beings in stages of neonatal, childhood, and adulthood. Some of these are assemblable and can receive integration of parts to create the patient’s history.

This is followed by the “live-action” of a real ambulance and its equipment by the corresponding emergency line, which is divided into trauma, pediatrics, and respiratory situations, the mannequin belonging to this division is of medium fidelity; this represents the wounds of an affected person in shock.

“This area was contemplated because of the importance of pre-hospital care for us in the country, with the attention that the 911 Emergency System has, we have seen the need to join efforts to bring a real ambulance, which was not being used by them and they kindly donated it and it was prepared for the teaching of these personnel,” said Engracia.

Four high-fidelity rooms offer the teacher and the student the expertise of a palpable and previously programmed reality organized by a technician.

Dean Uffre said, “I would like to tell you that this is for all the Dominican people, especially the health conglomerate and that it is something new in our university. I hope that the students, who benefit the most, will take care of the regulations that this Simulation Center has.”

Each career will have adapted systems for the simulations that correspond to them. These will be gradually opened to the public.