Brown Recluse spider on the attack! 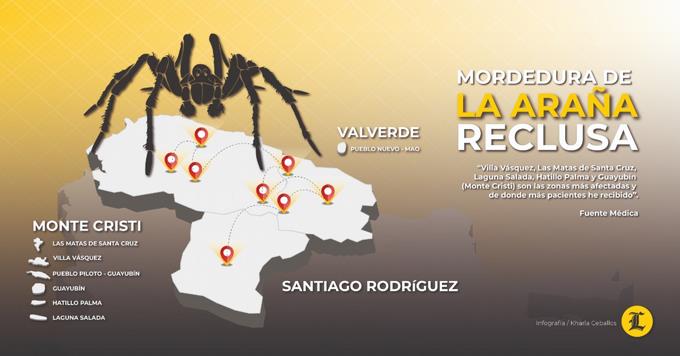 Santo Domingo, DR.
At least 15 people with injuries caused by bites from a type of tarantula, known as “brown spider,” have recently been clinically assisted, according to a medical source from a clinic in Mao, Valverde.

However, more than 50 cases of patients with bites have been registered in their offices in only three years.

The brown spider, considered “medically important” due to its potent venom capable of reaching the bone, is spread and silently attacks agricultural workers in the northwest of the country, mainly in the province of Monte Cristi. This occurred after a container of goods packed in wooden pallets with the spiders inside, coming from Brazil, disembarked at the Port of Manzanillo.

“The same patients that I have received, and that I have treated, have let me know,” assured the doctor while explaining that patients who have bites develop something similar to what happens with diabetes patients.

The brown spider, also called “recluse,” is a species of araneomorph of the Sicariidae family. It is considered the most dangerous of the spiders of the genus Loxosceles since its bite is capable of producing great toxicity in the area, even causing necrosis, that is, “the death of the cells and tissues of the bitten area,” severe systemic reactions and even death.

“Villa Vásquez, Las Matas de Santa Cruz, Laguna Salada, Hatillo Palma and Guayubín (Piloto) are the most affected areas of Monte Cristi and where I have received the most patients,” said the source, who also indicated that he has also received people from nearby areas, such as Santiago Rodríguez and Mao, in Valverde.

Most of those affected are of Haitian nationality, being this explained to the fact that “they are the ones who carry out the agricultural work in these areas located near the Dominican-Haitian border.”

It is rare to see the recluse spider when it bites because the bite does not hurt. Most bites occur while the person is sleeping.

Reactions to a bite are varied. They can range from mild irritation at the site of the bite to life-threatening poisoning.

According to the medical source, symptoms begin with redness and swelling of the affected area until the patient gradually loses coloration and turns dark blue, purple, and black.

Symptoms may include chills, itching, fever, nausea, and convulsions. As the spider bite goes unnoticed, the patient becomes careless and resorts to self-medication, using ointments, antibiotics, or anti-inflammatory drugs.

Spider bites are difficult to diagnose, even by physicians.

A person with a brown recluse bite goes to the doctor on the fourth day when the venom is in the middle part of the skin, and advanced, which warrants deep debridement, in short, “the removal of dead or damaged necrotic tissue.”

Patient management and treatment will depend on whether or not there is systemic involvement and the level of complication of the skin lesion. The spider toxin can last anywhere from a week to 10 days, depending on each patient’s body.

“I have had patients who have lasted up to 15 and 20 days in hospital,” says the medical source.

Patients can be rid of the poison, but permanent damage is created that must be treated. If it is not a complex case, in four to ten days, the person should have a resolution and is treated on an outpatient basis.

The medical source said that he found out from his patients what the brown spider was causing and “not because there has been an epidemiological follow-up by the authorities of the Ministry of Public Health.”