Santiago sinkhole case to be resolved next week 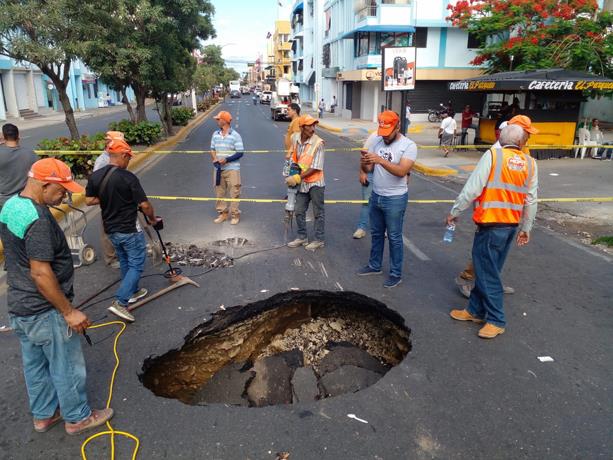 The collapse of the pavement occurred last Thursday at the intersection of Las Carreras Avenue. Brigades have been activated to solve the problem. /ONELIO DOMINGUEZ

Santo Domingo, DR
The Ministry of Public Works is working to solve the problem of the large hole that occurred on Las Carreras Avenue in Santiago, the head city of the province of the same name.

Alexis Sosa, the representative of that institution in the northern city, commented to this newspaper that the issue of rainwater there, as in the whole country, resulted in damage to physical structures, such as the sinkhole and the collapse of the wall of a dry bridge on that same road.

“Intervention is already underway, work is being done. The brigade of the City Hall is working, together with us; Coraasan is also checking the corresponding pipes, in case there is any that is damaged,” Sosa said.

Regarding the repairs, he said that the work will continue throughout the weekend and is expected to be completed next week.

“After checking the pipes and immediately the leak is corrected, they are going to proceed to backfill, because they are digging and proceeding to remove all the unusable material from the sinkhole,” he added.

“The pipe will be fixed, it will be backfilled and, subsequently, we will pave it,” he said.

In the case of the citizens who use this avenue, he indicated that the uphill section of two lanes enabled mobility.

He pointed out that they will order a general evaluation regarding the rains and the general situation of the structures.

“We, as a ministry, made a survey now of the situation and what we are going to do is a complete evaluation of the avenue and all the pipes, because these pipes are many years old since the avenue was built and it is possible that there are other points to intervene,” he commented.

The hole is of considerable depth and has complicated the regular circulation of vehicles on this road.

The event occurred after the rolling of a heavy truck. The ground in this area has been saturated by the rains of the last few days. When the vehicle passed, the surface collapsed, causing a sinkhole in one of the avenue’s lanes.

Also, a staff of the Ministry of Public Works and Communications (MOPC) has already intervened in the area with work brigades.

Sosa, regional director of Public Works, said that a team of technicians from the ministry is carrying out the corresponding studies to determine the causes of the hole in the ground.

Several members of the Dirección General de Seguridad de Tránsito y Transporte Terrestre (Digesett), headed by its northern regional director, Colonel Juan Bautista Jiménez, are also at the site and explained that they have had to reinforce the teams in the area with more agents to help make the traffic in the zone viable. Other problems, such as the landslide caused by the rains two weeks ago, have also hindered traffic on this busy road.

Meanwhile, residents of the sector explained that this situation has been going on for several years due to rain and subway water problems.

They also stated that they are afraid that one of these events could happen again and cause physical damage to a citizen.

Types and tips.
The definition of a sinkhole: is sinking in a portion of the ground or surface. This can occur because the soil is weakening below the surface, at the point when the earth can no longer be supported and collapses, leaving a dryness.