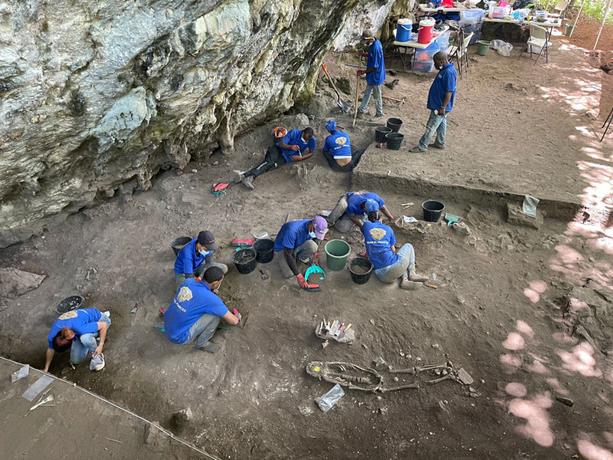 Group of archaeologists excavate, clean and collect remains found in a cemetery from 3,000 to 4,000 years old. jorge martinez/ld

Samaná, DR
The Cabo Natural Monument, in the eastern zone of the Samaná peninsula, houses a new archeological site that is currently being studied. It is a “Cemetery” with the remains of those who could be the island’s first settlers of Santo Domingo, according to the specialist in archeological methodology, Adolfo López.

The remains, estimated to be between 3,000 and 4,000 years old, were discovered a little over a month ago; however, for almost four years, a group of Dominican archeologists has been developing the project, which is focused on recovering the memory of the first cultural groups that entered and settled on the island of Santo Domingo.

“We want to know where they came from, at what date, who they were, what their customs were, what relations they had with other cultural groups of their time, from other islands, it could be from the Insular and Continental Caribbean (…) we want to build the origin and life of the first inhabitants of the island of Santo Domingo, because what we know is very little, and besides, it is all outdated. It is very old information,” said López to reporters from LISTÍN DIARIO.

To achieve this goal, archaeologist López, together with Sara Gálvez, a specialist in archaeological exhumations; the researcher and president of Guahayona Institute, Daniel Shelley, and a group of 12 Dominicans, residents of Samaná, have been working to locate archaeological sites in several areas of that demarcation in order to excavate and find human remains.

The main purpose of these excavations is to search for burial areas in order to obtain human remains for DNA, physical anthropology, and disease studies at Harvard University. In addition, they are trying to find out, through the analysis of starches, what products that these ancestors cultivated and consumed.

The cemetery
“The last and most recent thing we have found is this place, a cemetery, it is not a place of habitation where they lived, but a place where they came to bury their dead…. Here we are doing archaeological excavations of a site that belongs to a cultural group called “archaic,” which are much older than the Tainos,” explained archaeologist Lopez.

The expert describes it as “a funerary and ritual establishment” where the archaics’ first settlers of Santo Domingo went to bury their people and “which had a special magic and was sacred.”

“Maybe part of that magic was the stone of the cave, which is shaped like an iguana or maybe it was the same telluric force that this shelter has, but evidently there was something magical here, which motivated them to bring their dead and bury them in this place,” he said.

From the ground, the group of archaeologists unearthed 18 remains of individuals, but they specified that underneath there are others, in addition to those that time (humidity, tree roots) has spread, a sample that had never been found before”, added the archaeologist.

The group estimates that the remains found could be between the third and fourth millennium before the present; however, the data is still not precise until they obtain the results of the carbon 14.

“We have been able to observe different burial rituals. Some in fetal position, others in skirts, stretched and tied up,” exclaimed Gálvez, and added: “We know that they were groups of hunters and gatherers.”

They study remains
“We have searched in the sites that had already been excavated 30 to 40 years ago by the Museum of the Dominican Man and we have recovered some pieces, especially dental pieces of the skeletons, which are being studied in laboratories in the United States”, declared Lopez.

Other findings
In addition to the human remains, the excavation team found other magical-religious elements that give even more indications of the archaic period, among them stones carved in the shape of skulls. Also as hunting and cooking tools.

What follows
“Cleaning, analyzing, gathering, looking at the pieces and classifying them, that’s all we have left and it takes a long time. In archaeology we say that in the field we are in the field for one month and in the laboratory for 11 months,” said Gálvez, who also indicated that they are interested in that area to continue excavating because they are convinced that the first settlers of Hispaniola are found there.

International interest
“The work we are doing is in coordination with several universities and research centers. Harvard is in charge of doing the DNA studies, a university in Puerto Rico is going to do the fauna studies (animal remains), other universities are going to do the starch studies, of the pieces, to see what they crushed, the plants they ate, to see if they cultivated or not”, he commented while specifying that international organizations have given support to the project because of their interest in knowing the history of the cultural groups in the Caribbean.

“They are interested in all this because it turns out that very little is known about the ancient inhabitants of the Caribbean, people think we know, but the truth is that we don’t, and that is something that is known throughout the scientific world. When we proposed this project immediately the great instructions that investigate in the area joined us because it was an excellent opportunity where many questions, that until now we cannot answer, would be solved”, said Lopez.

A milestone in the DR
López cataloged the project, called “Identification of the Origin and Filiation of the First Archaic Inhabitants of the Island,” as novel, and especially at the international level. “To find a cemetery so large and so old is almost impossible, I didn’t even think it could be located and it is practically intact. This is a great contribution of the Dominican Republic to the research of all the cultural groups of the Caribbean,” he said.

Support and coordination
The group in charge of this research works together with Dominican and foreign entities such as the Guahayona Institute in Puerto Rico, the García Arévalo Foundation, the Museum of the Dominican Man, the National Direction of Museums, and the Vice-Ministry of Protected Areas.