Alienated people take to the streets 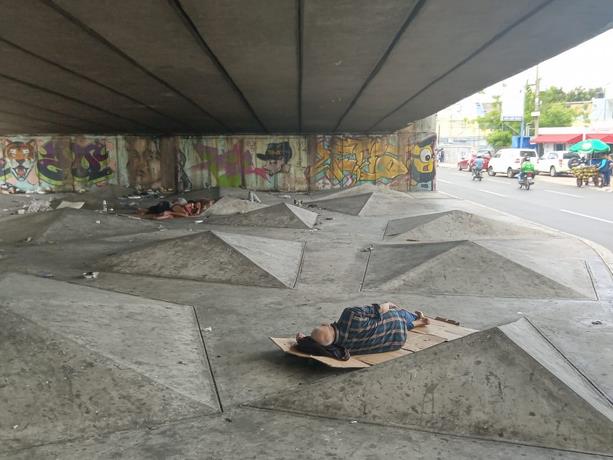 Any space in the capital serves as a refuge for people with various mental disorders and indigents. lourdes aponte /ld

Santo Domingo, DR
In different points of Greater Santo Domingo, people with apparent mental deficiencies can be seen wandering around the streets and avenues, where they make settlements or make disorders on public roads.

Sidewalks, streets, and underpasses are the places where the settlements of mentally deranged people predominate in the National District and Greater Santo Domingo, who do not have any kind of mourners and spend their days in the hardships of being nobody’s children.

The Malecon, under the Leopoldo Navarro overpass, in the Colonial Zone, and park sidewalks are some of the many shelters they use to sleep or “throw” their days away.
The precariousness ranges from complete filth and even disease, whose wounds are visible to the naked eye in a state of near decomposition.

In recent months, the sightings of people in street conditions and those affected in the mental health field have presented a notorious growth. The corresponding authorities have not taken action to correct or remedy the needs of those affected, which are also reflected in the social environment around them because when they enter into a crisis, they can attack or be assaulted.

Talking alone in the streets and sometimes chasing other citizens, which clearly shows that their psyche is not in good condition; despite this, the authorities responsible for health at the local level specify that most of those who wander the streets do not have this condition.

Several of the hospitals called to work in the services of this area of health do not even provide access to the press since their operation is partial or almost null in this area. Not having the necessary medicines and equipment to lack of personnel are some of the deficiencies in the mental health units of the State.

One of the cases which attracted the attention of the reporters of the Listín Diario is the number of people who are in a remarkable state of deterioration and who congregate under the overpass of 27 de Febrero Avenue, which in its lower part is under Leopoldo Navarro Avenue, where a number of more than six people can be seen in the place.

They seem to be between 40 and 70 years of age, most of them are women, and one of them is even a foreigner.

This same panorama was observed in the Colonial Zone, specifically in Cervantes Park, where several people were sleeping in the surroundings, while a man of approximately 50 years of age was running and dragging cardboard while shouting things to the wind.

In the Malecon of Santo Domingo, located in the center of the National District, a totally naked man was walking around the surrounding areas, where tourists and vehicles pass by, despite the fact that it is a space suitable for family recreation since it has amusement parks for children.

What does Public Health say?

The director of mental health of the Ministry of Public Health, the psychiatrist Alejandro Uribe, explained that there is a protocol of attention for the mentally ill who live outdoors in different parts of the country.

“There is a protocol, this starts by dialing *462, they channel the formation of a team that makes a descent, that is, goes to the scene, a team directly from mental health or with a member of the specialty and depending on the conclusion of the patient to which they arrive measures are taken,” he explained.

Uribe said that the evaluation team decides if the person needs to be admitted to a crisis intervention unit.

The psychiatrist also specified that not all patients seen on the streets are psychiatric.

“According to experience most of those found on the street are not psychiatric patients and do not have mental problems, it is necessary as a first step to make an on-site evaluation, the first thing to make sure is if there is a mental problem,” he explained.

There are also crack addicts on the street who have no problems obtaining this ‘worst of the worse’ highly addictive drug. There are several crack houses open all the time in the shadow of the National Police Station in the San Carlos flower market district located a few minutes from Zonas Colonial. The police continue to ignore the drug dealers who are destroying lives everyday. The rehab organization Hogares Crea should be making a public statement about this.