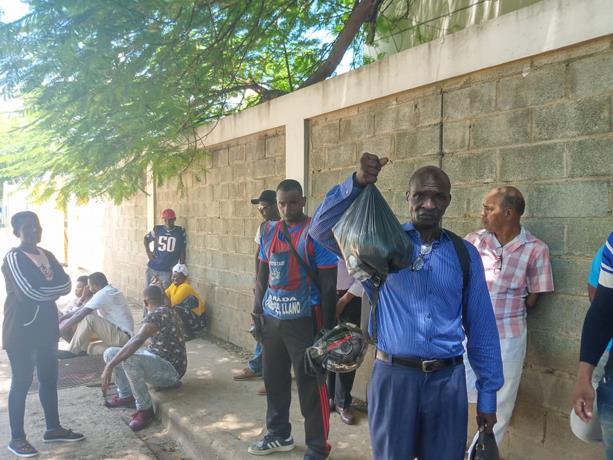 Haitians detained at the Reception Center in Haina.

Haina, DR
Outside the Haina Vacation Reception Center, which is used to send captured immigrants, several people with their immigrant relatives are detained there to complain about the mistreatment and the little or no information about their relatives.

According to the relatives, there have been detained here since Thursday; of which they explained that they have the same clothing as when they were detained and that they have allegedly not been provided with the proper food in their condition as detainees. “I have been behind my husband since Saturday, I have been able to talk to him a little bit because of a “maquito” he has and he told me that they are not being given food,” said Jeana Charles.

“A guard was asking me for 13,000 pesos to pass food to my mother who has been here since Friday, she was in San Francisco buying supplies for the boys and they took her away,” said Regina Pierre. Leuris de Leon is looking for his co-worker, nicknamed Junior. “Junior has been working with me for 6 years, he is a hard worker, he is always ready, he is 32 years old, he married a Dominican woman, since Saturday I have been here without knowing anything, they only tell me to go down to the fair,” said Leuris de Leon.

It is not uncommon for the authorities to roundup and detain masses of people beginning on Fridays, hold them in lockup over the weekend (courts gov’t offices closed), release some on Monday, and hold others for processing for whatever error they may have committed.

It is not uncommon for authorities make opportunity of this setup, such as the guard asking for RD$13,000 to pass food.