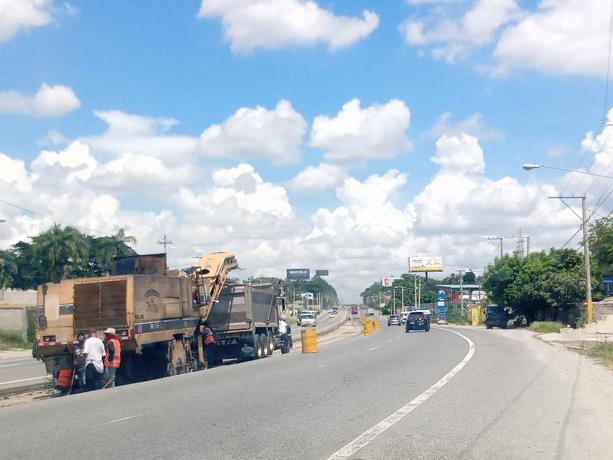 Public Works teams were working yesterday on the repair of an important section of the 6 de Noviembre highway.

San Cristobal, DR
On the 6 de Noviembre highway, from Santo Domingo to San Cristobal, restoration works are being carried out, and heavy machinery can be seen on the site.

Signs in luminous orange color, specifying to drivers that ” men are working,” are seen in the surrounding area.

Some areas of the highway connecting San Cristobal with the National District are being removed by machinery operated by the Ministry of Public Works workers.

Still, this section, which for those who live in the southern region is of vital importance since it is responsible for communicating different provinces with each other, has several pieces of asphalt without solving its sinkholes, which is the cause of several problems on this road.

This road section has been the scene of many accidents and is known by the citizens as a place whose vehicular flow is massive and dangerous for those who use it daily for their displacements to different points of the country.

On the 24th of last month, Listín Diario reported on the alterations that the people who use this busy road were going through due to the deterioration in which it had fallen.

The following day, brigades of Public Works began the lifting of the asphalt laid during the last administration, which, according to what they said, was of terrible quality.

The works will take place in four different areas: Entrance to Cambita, Constitution Avenue, Hatillo, and the Circunvalación.

In May 2021, the Minister of Public Works, Deligne Ascención, had given the first blow to the reconstruction of the 6 de Noviembre highway, which, for years, presented the same difficulties.

The official announced that the intervention of this highway would begin in the vicinity of the toll booth and would extend up to the entrance of Baní, Peravia province. The vital road would have an investment of about 300 million pesos.

Importance of this road