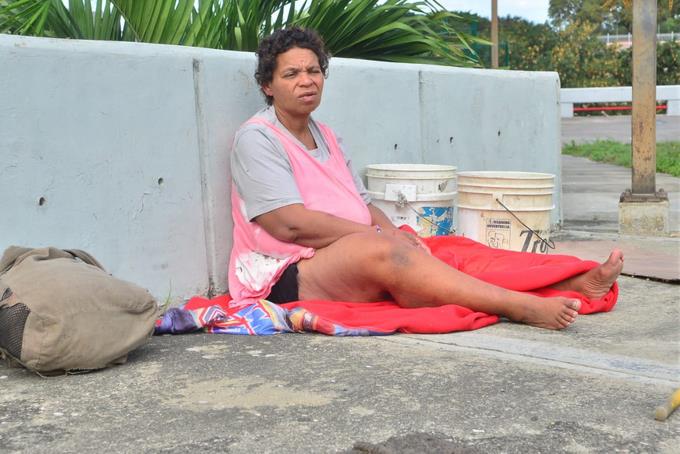 A woman with mental problems exposed to the elements, like a painful picture in a city where psychiatric illnesses are increasing. photo Onelio Dominguez

Santiago, DR
Mental health has become one of the most demanded medical services by patients in the Cibao region.

Despite the fact that Santiago has the largest Crisis Intervention Unit in the country, it cannot cope with the large number of patients seeking psychiatric services who arrive daily at this unit at the José María Cabral y Báez Hospital.

In addition to the cost of the psychiatric drugs, the patients who suffer from this condition and who come to the Cabral y Baez Hospital in Santiago must have the necessary patience to make an appointment, even for every five patients who are seen in the psychiatric unit, seven are waiting to be seen.

The head of the Mental Health Department of the Cabral y Baez, Hilda Valdez, explained to Listin Diario that the Crisis Intervention Unit has 20 beds and eight psychiatrists at its disposal, but they are insufficient.

“Some 20 beds for the population of Cibao are not enough, when we dispatch five patients we already have seven in the emergency room waiting,” explained the specialist.

She said that each peripheral hospital in Santiago should have at least a Crisis Intervention Unit with four or five beds because they do not have enough.

Valdez pointed out the factors that can lead people to suffer from a mental illness: a stressor, a work overload if the person comes with a genetic predisposition, but, above all, the consumption of controlled substances.

She explained further that young people with some drug addiction are the most prevalent and come to the psychiatric unit. “Currently, many young people are being admitted for substance abuse; they are people who at their young age become dysfunctional, they have multiple relapses due to substance abuse,” she said.

Valdez also explained that the family members of patients suffering from this disease are usually worn out because they have to be on top of them so that they take their medications and go to the medical appointment; but at the same time, she said that not all of them are like that since many are very disciplined, that is why they get out of that situation quickly.

The head of the department said that there are also therapies for these families provided in the same psychiatric unit.

“If the family accompanies the patient, then the process is much easier for everyone, so we have a patient with a better response,” the doctor explained.

She referred to the woman who committed suicide at her husband’s grave, who had died a year ago.
The psychiatrist said that the woman was suffering from unresolved pathological grief, which is why help should be sought in time, in the event of any mental illness, to overcome the crisis.

This country has the ability to become the best in the latin hemisphere for mental health treatment availabilty for everyone, to become “my brother’s keeper”.

Why does Dominican Today continue to publish photos of those who are suffering and obviously did not give their permission to be used in this manner. Here we are talking about sensitivity to mental illness and this woman is being shown careless, callous manner by this outlet. Shame on you DT.