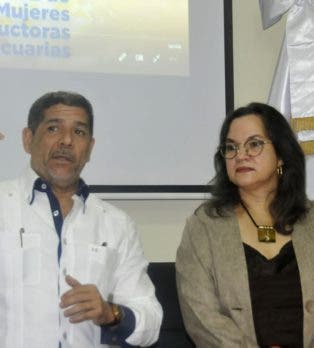 The Minister of Agriculture, Limber Cruz, affirmed yesterday that the prices of the basic food basket products have been decreasing and the food supply has been increasing.

He said that the Central Bank’s latest publications show that inflation has been falling in the five months and is at 0.21.

He pointed out that the country has increased the production of rice, beans, chicken, eggs, garlic, and other substitute imports. Cruz said that these increases in production bring down prices of some of these products, chicken, eggs, bananas, and others, but warned that prices could not fall all at once.

The official spoke during a press conference at the headquarters of Agriculture to announce the First Forum, “La Voz de las Mujeres Productores Agropecuaria”, to be held in the capital on October 13 and 14.

The Minister of Agriculture affirmed that in the country, about five products impact consumers’ pockets, such as rice, beans, plantains, eggs, chicken, and others.

He indicated that the Dominican Republic had increased production, especially of vegetables, under a controlled environment (greenhouses). Cruz said that he has been traveling around the country and that everywhere he sees women involved in agricultural production.

He assured that in the country, they could be assured that women’s equity is a fact in all the activities of the Ministry of Agriculture.

Mejía Gutiérrez pointed out that the role of OSAM is the body within the Ministry of Agriculture that has to do with the implementation of policies, strategies, and actions that go towards the equality of our women at the national level.

In addition, to empower women producers and make them participants in the country’s sustainable development, and include them in the entire political arena.