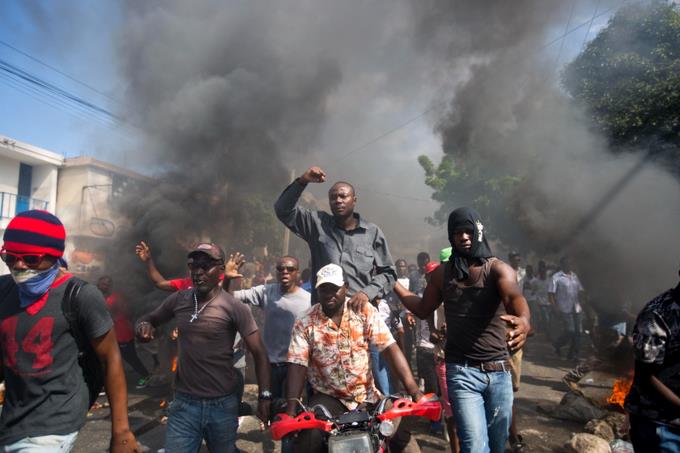 Santo Domingo, DR
Murders, kidnappings, vehicle theft, illegal carrying and distribution of weapons, and participation in criminal entities are some of the accusations and reasons why the Haitian National Police has issued search alerts against most Haitians that Dominican President Luis Abinader has banned from entering the country.

In addition to criminal gang leaders, Abinader ordered last Wednesday that Haiti’s former interim prime minister, Claude Joseph, with whom he has had some friction over the past year, be barred from entering the country.

However, Claude Joseph is the only one on the list of individuals who, for the Dominican government, constitute “some type of threat against national security and the interests of the Republic” and is not included in the alerts and files published by the Haitian police.

The others are headed by Jimmy Cherizier, a former policeman who leads the G9, the largest gang coalition in Port-au-Prince, composed of nine of the strongest armed groups in the Haitian capital and aided by other smaller groups throughout the city.

Cherizier, according to the website Insight Crime, an organization that delves into organized crime in Latin America and the Caribbean, was expelled from police ranks in December 2018, suspected of a massacre listed as one of the worst in that country in years: the La Saline massacre.

However, his people see him as a hero in the Lower Delmas sector, where he is better known by his alias “Barbecue,” a nickname he received because his mother was in the business of selling barbecued meat, not because he is accused of setting citizens on fire.

An internal investigative report from the Haitian police’s Criminal Affairs Bureau accessed by The Associated Press, according to a June 2019 release by that agency, called for the arrest of Cherizier and 68 others on charges including murder and rape.

Cherizier denied to journalists of the U.S. agency any connection with the massacre and claimed that his enemies linked him to what happened as revenge. Weeks after the event, the police accused him of being on leave without cause and dismissed him from the force.

Innocent Vitel’Homme, known as Vitelom, has been on a wanted notice since January 6 last year, along with 20 other gang leaders. He is the founder of Gang Vitelom, identified by Haitian authorities as one of the groups allied to the 400 Mawozo.

He is also identified as Torcelle or Torcel because of the city where he established the headquarters of his gang, called Tòsèl and Taba 70, according to Haitian media.

Last May, Haitian police rounded him up and tried to catch him in a failed chase in Pernier, a Port-au-Prince suburb. He has also been wanted in connection with several cases of kidnapping, murder, and car theft in the jurisdiction of Petion-Ville.

The Haitian media Juno7 reports that Destina Renel, famous under the nickname Ti Lapli, “is imposing his law in Grand Ravin,” a section of a commune that is part of Acul-du-Nord, in the North department. The charges for which the police are pursuing him include murder and kidnapping, especially of goods trucks.

The Spanish news agency EFE reported on May 30 that Ti Lapli’s organization, along with Bougoy and 100 Jours, targeted minors for arming.

In October 2020, Ti Lapli appeared on a radio broadcast to declare that he had kidnapped a top lottery executive because Barbecue was not providing funding for his gang.

Joseph Wilson, alias “Lanmò San Jou,” which can be translated as ‘Death does not know what day will come, is credited with leading the 400 Mawozo gang.

This group is estimated to have been created in 2016 and had its beginnings stealing animals, but they have expanded. Their specialty is kidnapping large groups for ransom, and they are assiduous at diverting Dominican cargo vehicles to rob them.

Their name is translated as “los 400 vulgares” and “los 400 inexpertos”. Half of the kidnappings in Haiti are attributed to this gang with the objective of obtaining money, in addition to creating crisis and political destabilization.

On the other hand, the leader of the Chen Mechan group is included in the same list as the rest of the most wanted criminals in Haiti. Claudy Célestin, alias the Wicked Dog and also known as Steveson Pierre, has been accused of executing his own aides and gang members. In 2016, Célestin was arrested after the population denounced his multiple robberies in the Shada area, near his residence, according to the document “Violent confrontations between armed gangs: RNDDH demands protection of the Haitian population,” presented by the National Network for the Defense of Human Rights (RNDDH).

However, two years later, he was released by Jovenel Moïse. He regained control of the zone and charged a fee to the companies established there so they could operate in peace.

The head of the “evil dogs” has a foundation called Ti Zanmi, whose structure is used by political authorities and members of the private sector to justify the funds paid to Chen Mechan’s base under the label of social activities, so explains the document published last May.

Ézéchiel Alexandre, leader of the Baz Pilat or Pilate’s Base gang, was arrested in downtown Port-au-Prince at the end of June for his alleged participation in the murder and illegal possession of firearms, rape, and armed robbery, according to the country’s print media.

RNDDH executive director Pierre Espérance, in an interview with Haiti Infos Pro, said Alexandre was involved in the massacres of La Saline, Bel-Air, Pont-Rouge and Cité-Soleil.

Chery Christ-Roi, of the armed gang Ti Bwa, whose alias is Chris-La, and Alectis Serge Renel, whose alias is Ti Junior, are also part of the list of non-gratos (persona non grata) in the country.

According to information published by the Haiti 24 portal, the two broke into at least 150 houses located in La Saline Project, Rue Desmangles, and Rue du Quai and executed their residents on the night of November 13, 2018.

Among the latest in the enumeration is Ti Gabriel, given name Jean-Pierre Gabriel, who controls Cité Soleil.

The report “Murdering with impunity,” published by the International Human Rights Clinic of Harvard Law School and the Observatory for Crimes against Humanity, records that this one supported the government opposition during “peyi lok.”

Members of this criminal clan once occupied a police station for a whole week.

Kempes Sanon of Baz BelAir, Orlichen Emile (Pe Lebren) of Baz Delmas, and Felix Monel (Mikano) of Baz Waff Jeremie are others who were banned from entering the country for their relations with the more than 50 criminal groups actively operating in Haiti.

These groups have increased the state of chaos and violence, as well as the socio-political crisis in which the nation had been living since before the assassination of its president, Jovenel Moïse.

It is common sense Haitian bandits are not welcome. There is animosity against any Haitian.

The president of the Duartiano institute, Wilson Wilson Gomez, welcome yesterday president Luis Abinader’s decision to prohibit the entry in to the country of the former Haiti’s ministry of Claude Joseph and and 12 other armed gangs leaders. He said in a note that Claude Joseph assumed a disrespectful and hostile behavior against the Dominican Republic, a country that contributes so much to Haiti, beyond its means, compromising its budget and part of the well being of many poor families. Funds that are exhausted by thousands of Haitians stablished illegally in parts of the island. Consider this a strategy to support his political aspiration in Haiti’s political scenery, using the Dominican Republic as a springboard with insults that reveal his resounding failures as a prime minister and his lack of suitability to occupy any other public function of transcendence.

Dominican bandits do not want or need any competition. Pickings are scarce enough.