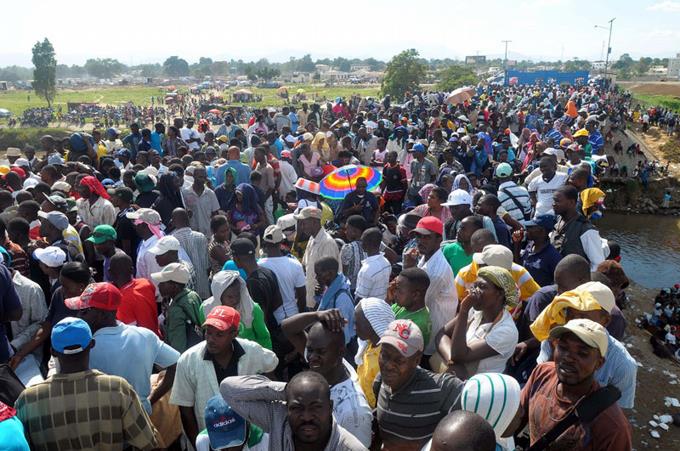 Since we were born as nations, relations between Haiti and the Dominican Republic have been marked by mistrust, stereotypes, and prejudice on both sides of the island. But the exploitation of Haitian labor for our agriculture and construction generated the need to justify that exploitation, promoting a story that presented Haiti as “the greatest danger to the country,” and Haitians as inferior beings. That discourse that expanded under the Trujillo dictatorship prevails today despite having no historical basis, nor is it supported by verifiable data. With the aim of helping to clarify false information and incorrect conclusions, we present these ten truths, which will allow us to see more rationally,

We are not simple neighbors like Cuba or Puerto Rico; we are a strange form of Siamese twins with different genetics and culture who share some common vital organs, which makes it impossible for us to separate. The above is aggravated by the fact that we are stuck from behind, which makes it difficult for us to see each other face to face and accept each other without prejudice. Seeing ourselves differently is a false and evasive illusion that prevents reaching pragmatic and objective solutions to an irreversible reality imposed by geography and history.

Haiti, for now, is not our biggest problem, nor does it represent an imminent danger to our sovereignty or national security. The idea that the ongoing crises in Haiti represent the biggest problem for our country is alarmist and false because it is precisely in the years of the most significant deterioration in Haiti (from 1990 to 2022) that our country has achieved the highest levels of growth and development. Likewise, let’s compare the scarce resources that our Siamese has and the real “power” of our country. We will see that compared to Haiti, we are an economical and military “power”: a GDP of 109 billion dollars, compared to only 21 billion from Haiti; and a military and police force of 64,000 troops and 38,000 police, compared to only 16,000 police and 1,200 soldiers in Haiti. So, as long as that vast asymmetry is maintained,

There is no “invasion” of 2 million Haitians in the country. The Second National Survey of Immigrants showed that in 2017 there were 570,933 immigrants in the Dominican Republic. Of that number, 497,825 were born in Haiti (87.2%), and the remaining 73,107 migrants come from other countries. In addition, there are 253,325 born in the Dominican Republic whose parents are of Haitian origin. Adding both figures, the total number of Haitians, either by migration or descent, adds up to 751,150. It is good to explain that 223,528 people were interviewed in the methodology. That number far exceeds the 1,200 samples of an ordinary survey, making it practically a census and reliable and secure. So, apart from this reliable scientific data, any figure based on instinct or visual appreciation,

The benefits of Haitian immigration far exceed its costs. Economic analyzes of migration show that the receiving country of migrants is the winner of migration since the consumer wins by buying cheaper products, and the employer wins by paying lower wages. The State wins by receiving indirect taxes through migrant consumption. Although also immigration may increase local unemployment, wages are depressed, and incentives for introducing technologies are lost. But if the migrant only fills the jobs that the native worker despises, it would be a contribution and not a detrimental competition.

There is no structural racism against Haitians in the country, although there are different forms of social discrimination for economic reasons. From the first stage of the formation of our nationality, the relatively “soft” slavery that our patriarchal oligarchy adopted made slaves and slave owners, black and white, mix, forming one of the largest “mulatto” societies in the region. That historical fact sealed racial tolerance in our collective conscience. However, the need to justify the exploitation of Haitian labor has sown social prejudices that have become social discrimination, especially against poor Haitians. So accepting that we are racist is false, and denying that there is discrimination as well.

The Haitian issue does not generate votes, provide leadership, or win elections. Electoral statistics and polls show that the parties that have used the Haitian issue as a banner have not grown and have fallen far behind in the electoral processes. And although the issue appears in the polls as a public concern, in general, that concern does not translate into votes or leadership. In fact, neither the two great parties of our recent history (the PRD and the PLD) nor their historical leaders agreed to use the Haitian issue as a political weapon, knowing that this issue divides the country, hurts the people and the Haitian government, damages our reputation abroad, stimulates negative feelings in our fellow citizens and makes us look insensitive to the misfortune of the Haitian people.

Hiring Haitian immigrant laborers and denying them their labor rights is inhumane, counterproductive, and illegal. First, it violates human dignity enshrined in international treaties and our Constitution, encourages abuse and exploitation, degrades us as a civilized society, perpetuates poverty among migrants, and generates ghettos of misery full of resentments that can end in violence. In addition, it gives credibility to the idea that there is xenophobia and discrimination in the country, exposes us to international sanctions, and takes away our legitimacy in defending the rights of our own migrants abroad.

The “international community” does not believe in the viability of Haiti, acts insensitively, and avoids facing the problem with seriousness and determination. That “international community” that reacts immediately to any crisis in countries like Venezuela or Ukraine does not respond to exponentially more severe problems in Haiti. When it finally reacts, it does not keep its promises. The little help is diluted by international bureaucracy and internal corruption, condemning our neighbor to eternal stagnation and a humanitarian crisis that does not seem to matter to the hemisphere or the world.

The discourse of leaving Haiti’s problems to an “international community” that is not interested in the Haitian issue is evasive and does not solve anything. That speech would be effective if we weren’t back to back and didn’t share common vital organs. Therefore, we are obliged to see Haiti with an optimistic, pragmatic, and proactive attitude, with the strategic awareness that Haitian poverty with its consequences and the lack of a functional State represent the real strategic problem for our country. So, betting on the development and stability of Haiti is the only viable and sensible path we have since a prosperous and stable Haiti would turn a latent problem into a great opportunity.

The imposition by the “international community” of a political and social model that does not correspond to its historical reality or idiosyncrasies prevents the development of Haiti. Attempting to impose a Western-style “democracy” in a country with minimal capitalist structures, with a subsistence economy, a dysfunctional State, and with more than half of its population below the poverty line and without school education is not only a historical absurdity that stimulates chaos and disorder, but also a hindrance that prevents the creation of fundamental economic and political institutions that release the potential of a country, which, like ours, is rich in natural resources, tourist potential, abundant human resources, a vital diaspora, an important although dispersed intellectual and professional class and a privileged geographical location. The only thing missing is the concert of internal and external progressive forces for its development potential to be released. The Dominican Republic must be an essential part of that concert for the good of Haiti and ourselves.

1
Reply
My Name Is Not Important
Reply to  master

The benefits of Haitian immigration far exceed its costs. Economic analyzes of migration show that the receiving country of migrants is the winner of migration since the consumer wins by buying cheaper products, and the employer wins by paying lower wages. That truth number 4 😂😂if it so true why doesn’t United States take them all ?????? There’s no other country with cheap labor around the world just Haiti 😂. Oh god who wrote this . If he or she like them so much take them all with you please leave the whole island to the Dominicans. 😉

Amen !!! Well written and thought out.

I do agree to some of the news article but I know it’s true that Dominicans feel very uncomfortable living next to Haiti. A country that got it’s independence at the wrong time line , I said that because every other country in Europe and the United States were esclavistas and in to the slaves trade. I only wish the best for Haiti but I keep reading mostly uncomfortable news about Haiti, it seems to me that Haitians lack the know how to govern themselves, no wonder Dominicans wanted theirs self determination from them . Haiti received a lot of help from the international community, that might be the reason the world nations lost interest in them (Haiti). I know I get tired of hearing the same story on the news or reading the news. There’s is a solution for Haiti, what Haiti needs is a depopulation on the island , the less people to govern the better to control, but I guess Haitians are to stubborn. My only hope is Dominican Republic don’t give into the United States schemes….the world powers have enough land and resources for them(the Haitians) take them all , even if Dominican Republic have to pay a price, and Dominican Republic could and will govern the whole island for the betterment of people on it !!!!

#11. There is no Dominican solution for the Haitian problems. No nation can be forced to accept immigration beyond its strength, nor it can be cornered by the international community to give up its territory rights. Many are under international nonprofit organizations payroll to write articles like this to favor the peaceful occupation of the Dominican Republic.

I am Haitian-American. This is a great article. I used to think there are no Dominicans capable of making such an impartial analysis of the Haitian-Domimican situation. I was wrong. Great article. I approve.

Most common skin diseases in the country