The President of the Republic, Luis Abinader, met at the Capitol with the Speaker of the House of Representatives, Nancy Pelosi.

The meeting was attended by the Minister of Foreign Affairs, Roberto Alvarez, the Dominican Senator Adriano Espaillat, Ambassador Sonia Guzman, and Mr. Jose Singer, Ambassador Plenipotentiary of the Permanent Mission of the Dominican Republic to the United Nations Security Council. 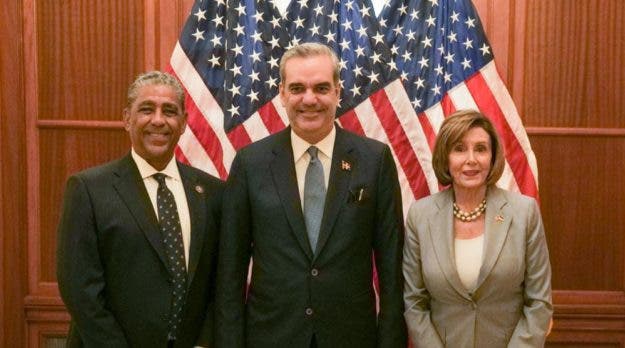 President Abinader’s Agenda in Washington DC
During his stay in Washington, the Dominican Head of State will hold a meeting on Wednesday on Capitol Hill with the Speaker of the House of Representatives, Nancy Pelosi, at 1:45 pm.

Afterward, he is scheduled to meet with the Inter-American Development Bank (IDB) president, Mauricio Claver-Carone.

Meeting with congressmen
Abinader will be received on Thursday by U.S. Congress on Capitol Hill members, an activity organized by the Dominican congressman, Adriano Espaillat. The meeting is scheduled for ten o’clock in the morning.

In addition, the President has scheduled other meetings with Senator Bob Menendez, Chairman of the Foreign Relations Committee of the U.S. Congress, and Samantha Power, Administrator of the U.S. Agency for International Development (USAID).

Luis will return to the country on Thursday night.

Here we go again trying to bully the Little country. Why doesn’t the United States go to Haiti to help instead of wasting time with these meetings and take at least take million Haitians to the USA>

Did you see how they “released” a report about the working conditions on the 2 sugar mills still working just 2 days before the meeting? a clear move to intimidate the president and to put him on the defensive. A report about a dying industry that employs ever decreasing amount of people becomes themost relevant topic for US policy towards DR? or is because most of theose workers are hatians and they want to bully DR into taking more haitians in?

What can it be expected of a person like Kamala Harris, who said on September 9 that the US border is secured. She then insisted that the answer is to create a pathway of citizenship for ALL illegal immigrant, including the 4 million who had arrived during the Biden administration.

Meeting with devil is never a good sign…USA is or boss…!!!