Abinader meets today with the vice president of the United States 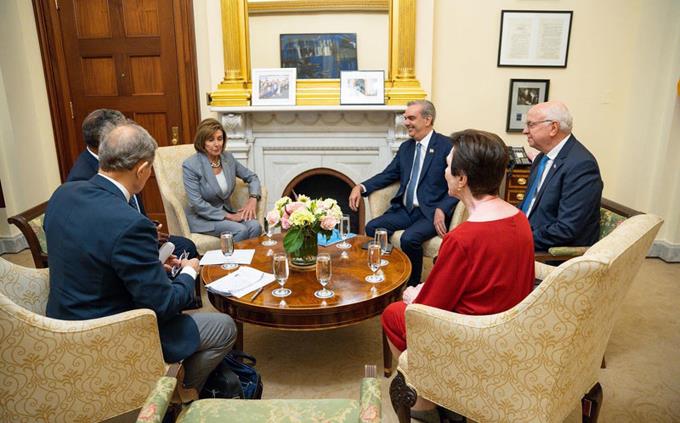 President Luis Abinader met yesterday at the Capitol with the leader of the United States House of Representatives, Nancy Pelosi.

Santo Domingo, DR
President Luis Abinader met in the United States yesterday with the Speaker of the House of Representatives, Nancy Pelosi.

The Dominican President’s first meeting during his visit to Washington was held on Capitol Hill. What was discussed at the meeting scheduled for 1:45 pm was not immediately known.

Abinader will also hold a meeting with the Secretary General of the Organization of American States (OAS), Luis Almagro, and attend a protocol session at the Permanent Council of the OAS.

After the meeting with Pelosi, President Abinader went to the headquarters of the Inter-American Development Bank (IDB), where he held a meeting with its President Mauricio Claver-Carone, and other officials.

Afterward, Abinader went to the United States Agency for International Development (USAID) headquarters, whose administrator, Samantha Power, met him at the entrance of the building – to the surprise even of her staff – and took him to her office.

The President’s day in the U.S. capital yesterday concluded with another meeting on Capitol Hill, this time with Senator Bob Menendez, head of the U.S. Congressional Foreign Relations Committee.

Today, the Dominican head of state will also be received by members of the U.S. Congress at the Capitol. This activity will be organized by the Dominican congressman, Adriano Espaillat. The meeting is scheduled for 10:00 am.

The President will also meet with the director of the Western Hemisphere of the Security Council, Juan González, and with Philip Gordon, National Security Advisor to the Vice President of the United States.

President Abinader left yesterday morning on an official visit to Washington, the capital of the United States, accompanied by the Minister of Foreign Affairs, Roberto Alvarez; his assistants Eilyn Beltran and Lourdes Herrera;

He was accompanied by José Singer, Foreign Policy advisor to the Executive Branch, as well as members of his security team, headed by the head of the Presidential Security Corps (CUSEP), Brigadier General Jimmy Arias Grullón. President Luis Abinader will return to the country on Thursday night.

Departure from the Air Base.

The President departed from the terminal of the San Isidro Air Base, where he was seen off by the Minister of Defense, Carlos Luciano Díaz Morfa, and the general commander of the Dominican Republic Air Force, Carlos Ramón Febrillet Rodríguez.

The flight left at 9:11 a.m. and arrived in the North American capital around noon.

If only this government which seems to consist of few people would actually do something instead of just talking . All the infrastructure needs constant maintenance but at present the electricity supply and the fresh water supply to the overwhelming majority of dwellings is worse than before. Roads and bridges are are in worse condition and the cost of living is higher .