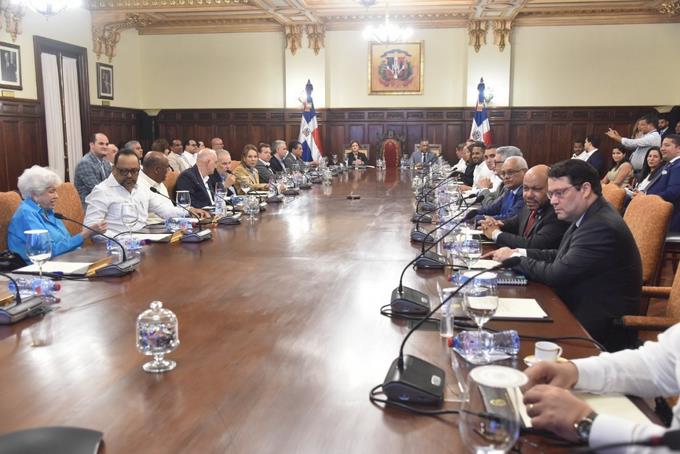 Santo Domingo, DR.
The Dominican Government informed last night that the draft budget for the fiscal year 2023, which they must present to the National Congress, amounts to total revenue of one trillion thirty-three billion pesos.

The details were offered by the Administrative Minister of the Presidency, José Ignacio Paliza, and the Minister of Finance, José Manuel (Jochi) Vicente, after a Council of Ministers headed by Vice President Raquel Peña.

“As you are aware, President Abinader has been heading a well-known agenda of projects, works and emblematic development efforts throughout the national territory and this budget for next year contemplates many of them to be completed,” Paliza said at the end of the meeting at the National Palace, behind closed doors, for an hour.

The official cited among these works are the monorail in Santiago and the Santo Domingo Metro extension lines to Los Alcarrizos.

He indicated that the draft Budget and General Law of Public Expenditures for 2023 contemplates the “usual investment” of 4% for Education.

Finance Minister Jochy Vicente detailed that the budget bill has more than RD$135 billion to help mitigate inflation and maintain the different subsidies, especially for social protection and fuel.

This clarification comes just days after a controversy was created after the Government proposed the reduction of more than 4 billion pesos to the Ministry of Education (Minerd) budget to be transferred to other state institutions to be “used” for the remainder of the year.

“This budget incorporates the priorities of the President, perhaps one of the most important is social protection; this budget incorporates some 135,000 million that will be destined to protect and mitigate inflation and the whole issue of the Russian-Ukrainian war, through various subsidy programs, as for example you know Supérate; the fuel subsidy that is made on a weekly basis,” explained Vicente.

Other details
The minister indicated that a deficit of around 3% of the Gross Domestic Product (GDP) is foreseen, which is a reduction of the 3.6% contemplated for the closing of 2022.
The total expenditures are one trillion 241 billion, and total capital investments are estimated at one trillion 356 billion pesos.

The Budget Law
The Constitution of the Republic establishes that the Executive Branch must submit to the National Congress, not later than October 1 of each year, the General State Budget Bill for the following year.