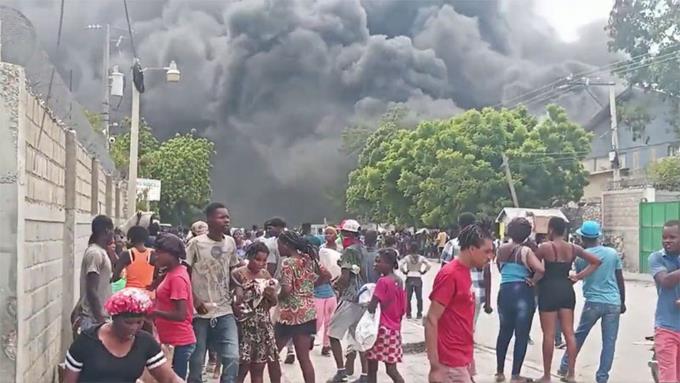 Santo Domingo, DR.
The Dominican Republic closed its embassy and consulates in Haiti yesterday, in addition to withdrawing its civilian personnel for security reasons, due to protests in the country over the high cost of living and the government’s decision to suspend fuel subsidies.

Haiti’s main cities are paralyzed by massive protests in the impoverished nation, which is also plunged into growing gang violence.

The Dominican diplomatic headquarters ordered its closure to the public until further notice due to the insecurity in the neighboring nation, thus joining France, Spain, Mexico, and Canada, which had adopted similar decisions the day before.

Despite the closure and the evacuation of civilian personnel, the legation specified that its telephone lines and social networks would continue to provide guidance.

In case of emergency, the Embassy made available to Dominicans residing in Haiti the telephone number +509 2813-0887 or email [email protected]

The Dominican embassy also recommended that Dominicans in Haiti “be cautious, limit their movements and have with them, as far as possible, basic necessities” such as non-perishable food and medicines.

Last Sunday, alleging that the State lacked funds to continue with the subsidies, Haitian Prime Minister Ariel Henry announced an increase in the prices of gasoline and other fuels.

As a result of the decision, mobilizations intensified since last Wednesday, with blocked roads, public transport stopped, and businesses closed in case of possible attacks by demonstrators.

Yesterday morning, the Professional Association of Banks (APB) announced the total closure of the operations of commercial banks throughout the country due to the riots which affected several of their branches.

Of the total number of banking institutions in Haiti, eight are commercial, the most important being Banque de la République d Haiti (Central Bank), Banque de Union Haitienne, Banque Nationale de Crédit Haiti, Capital Bank Haiti, Citibank Haiti, Sogebank Haiti, and Unibank Haiti. According to a note issued by the guild that groups them, the commercial banks explained that they were forced to close their doors to ensure the safety of customers and employees.

They hoped “calm will return in Haiti so that the banks can continue to serve their clients.”

Haiti’s National Television (TNH) was also the target of an attack yesterday by violent groups protesting against the government’s measures to increase fuel prices. The demonstrators attacked the TNH facilities en masse and set fire to three parked vehicles.

In view of the increased tension in the metropolitan area and surrounding areas, the National Police Directorate announced the suspension, until further notice, of permits to carry weapons.

Videos of fans posted on social networks show scenes of looting of complex 18 in Juvénat, Pétion-ville.

In the Port-au-Prince metropolitan area, large businesses were closed to the public, while customers and employees were urged to stay at home.

This Thursday, serious disturbances were also reported in Gonaïves: the offices of the NGO Caritas were ransacked and the demonstrators, after a first unsuccessful attempt the day before, managed today to take everything they found in their path at the premises of the World Food Program (WFP).