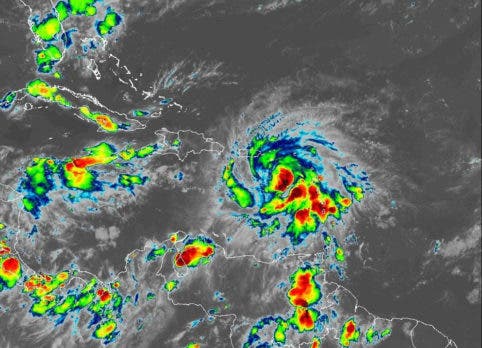 Storm Fiona continues to move westward at 15 kph with maximum sustained winds estimated at 95 km/h (60 mph) with higher gusts, with some increase expected in the next 24 hours due to favorable conditions, the Emergency Operations Center (COE) reported today.

In this regard, the COE continues to place 12 provinces on red alert, increases to 10 provinces on yellow alert, and 9 others remain on green alert due to the fact that tropical storm Fiona is located about 275 km southeast of Ponce, Puerto Rico and about 480 km southeast of Saona Island.

Juan Manuel Méndez García, director of the COE, asked the population to remain attentive to the bulletins we issue and follow the recommendations we make in view of the rains that are forecast for this Sunday as a result of storm Fiona.

Onamet
Likewise, the National Meteorological Office (Onamet) assured that at 7:00 p.m. today, the center of Tropical Storm Fiona was located near latitude 16.8 north and longitude 64.8 west, about 230 km southeast of Ponce, Puerto Rico, and 435 km southeast of Saona Island. It is currently moving west/northwest at about 15 kph.