The effects of Fiona will be felt in the Dominican Republic from today onwards. 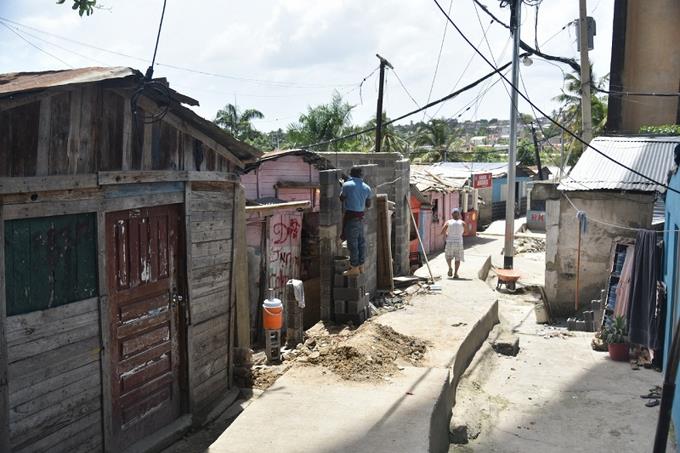 Fiona's effects would be felt most strongly in the early hours of Monday. Jorge Luis Martinez / RHP

Santo Domingo, DR
While the final trajectory of tropical storm Fiona is being determined, the Emergency Operations Center (COE) has placed the entire country under a weather alert, including 12 provinces on red alert.

At the time of writing, the center of Tropical Storm Fiona was located near latitude 16.4 north and longitude 63.8 west, about 360 km southeast of Ponce, Puerto Rico and about 550 km southeast of Saona Island. It is moving westward, slowing to about 13 kph.

Maximum sustained winds are 95 kph (60 mph), with some increase expected as it moves through the warm waters of the Caribbean Sea. The storm-force winds extend about 205 km outside its center.

With the threat of the storm’s arrival, the whole country is beginning to prepare and take its own preventive measures, while others are waiting for the evolution of the atmospheric phenomenon.

In El Túnel, in the Capotillo sector, and other communities located near the banks of the Isabela River, residents say they are not prepared for the passage of tropical storm Fiona.

The imminent impact of Fiona on Dominican territory will be felt next Monday. The alerts issued by the National Meteorology Office (Onamet) and the Emergency Operations Center (COE) have called for preparedness in the most vulnerable sectors.

“No we cannot leave here because we have nowhere to go. As this is not the first time, we are prepared for tomorrow to start bringing up the televisions and everything that can be damaged in high places and the child, we are sending him from today to an aunt; so that we can run away”, said Josué, who lives with his parents and a minor.

The dozens of families live on the banks of the Isabela. Despite being aware of the damage that may be caused by its passage, after having lived through previous meteorological phenomena, they affirm that they will wait until tomorrow to start making decisions to protect them from the risks.

Emergency shopping is linked to the urgency of school children

Several shopping centers were full of customers yesterday. When going around several stores in Greater Santo Domingo, it was noticed that while some prefer to buy the supplies that their children will use for the beginning of the school year next week, others were doing some “emergency shopping” as part of their preparation for the possible impact of tropical storm Fiona.

“I have three boys, I work every day and I am taking advantage of this time to buy supplies,” said Alejandrina Perez.

Like Perez, many parents were in the same situation, even knowing that classes had been postponed and instead of starting on Monday, they would start on Wednesday due to the effects of Fiona.

However, a large number of people were buying food motivated by the arrival of the atmospheric phenomenon Fiona.

“One does not know what could happen; I am worried, it looks like it is coming with force,” said Roger Pascual.

There, people crowded to buy canned food, and the bakery and dairy aisles had a great flow of buyers.

“What happens is that the Dominican puts a padlock when he is robbed; you will see how on Sunday under the downpour they are after everything, it is better to get out of things with time, that is only forgiven to those who do not have the resources at the time,” said Frank Lalane.

The organizations belonging to the Emergency Committee in the province of Bahoruco are reactivated in view of the threat of storm Fiona, which is expected to enter the country early Monday morning and which is currently heading towards the island of Puerto Rico.

Governor Juana Cristina Mateo summoned for 10:00 a.m. today the various institutions that make up the relief committee in order to deploy a prevention operation.

The official said that greater attention is paid to the most vulnerable areas of the province, which historically suffer the greatest onslaught of atmospheric phenomena.

“First we have Villa Jaragua, when it rains it floods with streams, also the municipality of Tamayo, which you know is very vulnerable. As well as other points, where we orient about the storm,” Mateo said.

The Neyba market is not only attended by buyers and traders from Enriquillo but also from other regions, such as El Valle, in addition to vendors from neighboring Haiti.

This Saturday, thousands of people crowded the market to stock up on food, some motivated by the phenomenon.

“I’m going to buy beans, coconut, salad, seasoning; you must be prepared for the storm,” said Mrs. Guadalupe Peña.

The President of the Chamber of Commerce and Production of Bahoruco, Yssa Miguel Lama, consider that Fiona will not enter this region but assures that the people are foreseeing in case the opposite happens.

“So far people have been stocking up, for example, on light bulbs, coconuts and other merchandise,” said the President of Centro Comercial Lama.

In Barahona, after a meeting held at the headquarters of the Civil Defense in that province, the regional director of the agency, Carlos Confidente, together with the governor Dionnes Maribel González Medrano and the mayor Míctor Emilio Fernández de la Cruz, deployed a series of preventive measures for the referred province before the passage of storm Fiona.

Fernández de la Cruz said that as prevention, in the municipality and the province, protocols were adopted to prevent any impact as a consequence of the rains left by the atmospheric phenomenon as it passes through the region.

Among the measures are the pruning of trees, and cleaning of ravines, with identification and location of shelters in case there is a need to use them to accommodate people who may be affected by the rains.

Likewise, a review was made of the logistics available to the State institutions in the province, and above all, the population was advised to be aware of the trajectory of the phenomenon and to collaborate with the authorities.

Meanwhile, the general director of the UASD Barahona Campus held a meeting with those in charge of the different areas that make up this academic unit to instruct them to protect the university’s properties.

Manuel Antonio De La Cruz Fernandez, accompanied by the deputy academic director, Ana Lucia Beltré, and the administrative Biridiana Batista, said that given the authorities’ forecasts, it is necessary to protect the properties of the first university of America in Barahona.

In addition, at the meeting, it was agreed that the non-resident professors who come from the headquarters of the Autonomous University of Santo Domingo (UASD), can return to their homes from two o’clock in the afternoon so that they can be with their families and take any preventive measures with their families.

In La Romana, the Provincial Committee for the Prevention and Mitigation of Disasters informed that they have 56 shelters available in the province, guaranteeing that they have taken preventive measures before the eventual passage of storm Fiona through the country.

Governor Jacqueline Fernández has met on several occasions, leading the work sessions, taking preventive actions, with the corresponding organizations of the COE and the Civil Defense, which in turn have 80 volunteers, who began several days ago the preventive work, this Saturday included a warning to the residents of the Rio Salado sector, about the need to go to relatives or shelters in case of emergency.

The authorities informed that the hospitals had been reinforced with medical and nursing personnel and medicines, on which the provincial director of Health, Francisco Alejandro Hodge, gave a report at the most recent meeting.

The governor called on the population to remain alert and informed through the media and official channels in view of what could be storm winds and accumulated rainfall.