Hurricane Fiona is felt in several parts of the country 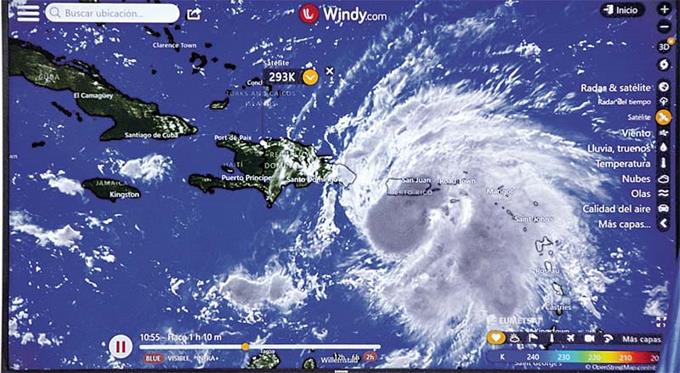 Santo Domingo, DR
Since the middle of this past Sunday, Hurricane Fiona began to have an impact on the deterioration of weather conditions in the Dominican territory with rains and wind gusts that increased as the hours went by.

Although the eastern zone has been the one that has registered the greatest presence of these conditions, the characteristics have been repeated in different points of the country.

In view of the consequences of this phenomenon, state and municipal measures have been adopted to preserve lives and avoid risky situations, among them, the declaration of a non-working day for this Monday.

The Executive Power’s decision includes the suspension of public and private work throughout the country. Likewise, the mandatory evacuation of people at risk in the provinces has been issued under red and yellow alerts.

Precisely, these alerts cover more than 20 of the provinces, and the remaining ones remain in green.

According to reports from the National Meteorological Office (Onamet), by Sunday afternoon, Fiona was detected with winds of 130 kilometers per hour, typical of a Category I hurricane on the Saffir-Simpson Hurricane Intensity Scale.

Fiona, which began as a tropical depression and is already a hurricane, has presented an “inconsistent” trajectory that has forced the agencies of the Dominican Republic and the entire region to maintain “strict” monitoring. Last Wednesday, the formation of the seventh tropical depression of the current hurricane season was announced.

At that time, the natural phenomenon registered maximum sustained winds of 55 km/h, with higher gusts.

The following day, it was upgraded to a tropical storm just when it was about 935 kilometers east of the Leeward Islands of the Lesser Antilles. Finally, around noon on Sunday, it became the third hurricane of the current hurricane season.

The official identification of the hurricane was confirmed based on the observations of a reconnaissance plane or hurricane hunter and data from the Doppler Radar of Puerto Rico, which were able to detect winds of 130 kph on the Saffir-Simpson hurricane intensity scale.

According to the projections and if it continues with its same movement, the center of Fiona would be located in the early hours of Monday morning between 10 and 30 kilometers northeast of Cabo Engaño.

For this reason, eastern provinces such as La Altagracia and El Seibo began to feel winds with hurricane and storm intensity at times, and which will gradually spread to other provinces such as Hato Mayor, Monte Plata, Samaná, Sánchez Ramírez, among others.

Alert in the country.

Electricity sector in permanent session due to the passage of Fiona