Tropical Depression 9 forms; will generate downpours from this Friday on the Dominican Republic 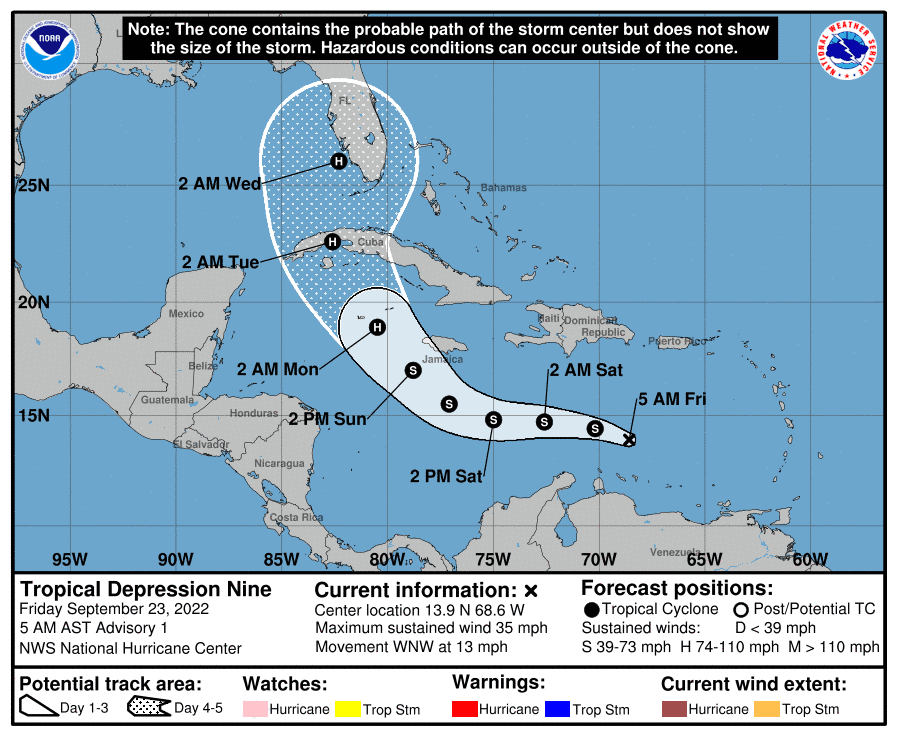 The Onamet said that this afternoon there will be cloudy with downpours, electrical storms and gusts of wind associated with tropical depression number 9, over the regions, east, southeast, southwest, north and Cordillera Central.

“We will have conditions and the occurrence of precipitation, electrical storms and gusts of wind, especially over the Caribbean coastal zone. In the afternoon, these activities will be more frequent and intense, they will be projected on the north, southeast, northeast, southwest, Central Cordillera, Cibao Valley and border points, they will extend into the night, “he said.

The Onamet said that for this Saturday the tropical depression is forecast to reach the category of tropical storm near the island of Jamaica, so it is expected that the humidity of said system will cause clouds with downpours, electrical storms and gusts of wind, being more intense and frequent in the afternoon and at night, over towns in the northwest, north, southwest, Central Cordillera, Cibao Valley and border area.

“On Sunday, said tropical system will move away, however, we will have, due to the drag of the southeast wind, a warm environment, in the afternoon cloudy with showers and thunderstorms in the Central Cordillera, northwest and scattered points in the southeast,” he explained.

The Onamet stated that as of this afternoon it is recommended to navigate with caution near the Caribbean coast. Due to the expected rainfall, Onamet maintains weather warnings and alerts for possible flooding of rivers, streams and ravines, as well as urban flooding and landslides in 26 provinces.

Since Monday, the DR hosts the América Abierta program