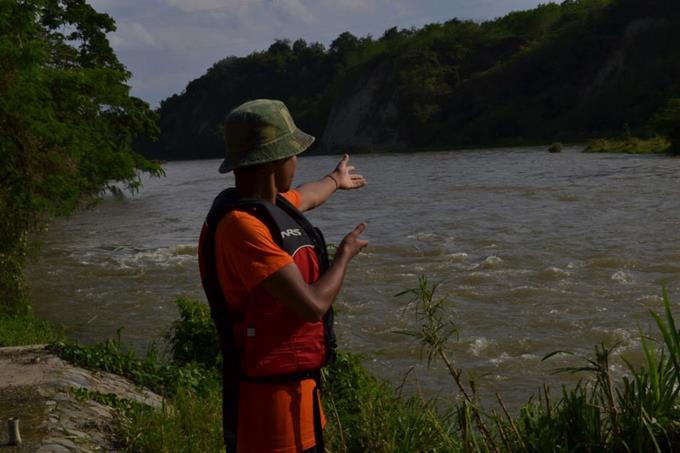 The levels of contamination, decreased flow and settlements of people on its banks are its main enemies. onelio dominguez

Santiago, DR
The Yaque del Norte River, the most crucial aquifer basin in the Dominican Republic, with a length of 296 kilometers, has caused the concern of dozens of institutions due to its high degree of contamination.

Considerable economic resources have been invested for years, and others are in investment plans. All of this is to curb contamination, the decrease in water flow, and the irregular settlements of people along its banks.

Dozens of “non-profit” entities, as well as the business sector of the region, and diverse institutions of the State, have shown concern for the progressive deterioration of the Yaque del Norte, according to ecologists and other sectors of Santiago, for which the plans and projects must go beyond the proposals. Eighty-one moreover,  rivers directly or indirectly support the Yaque del Norte.

Walkiria Estévez, the coordinator of Fondo Agua Yaque del Norte, explained that in the current conditions of the river, its basin is divided into three parts: high, middle, and low.

“We have a very strong issue in the upper part, especially with the issue of surveillance of what is happening in that area, and then when it enters Jarabacoa and all those towns, it gets contaminated because we do not have a treatment plant and all those houses, mostly cabins and tourist centers, do not have a plant to treat the water,” said Estévez.

When reaching Santiago, the Yaque del Norte river deepens its contamination with the waters of the Gurabo stream and other streams.

“Eighty percent of the water of the Yaque river goes to the irrigation canals. In other words, the river is used and has a dominant role in agricultural matters.

“From the Water Fund together with the different irrigation boards, we are doing a project that was recently created to see how we can decontaminate from the agricultural part,” explained Estévez.

The Yaque del Norte irrigates 125,000 tareas and supplies drinking water to the Aqueduct of the Northwest Line and Santiago.

At its exit from Santiago, the high levels of contamination and the considerable decrease in the basin flow are evident. Before, there were areas irrigated by the waters of the Yaque del Norte, and now due to the low flow, it is no longer possible.

Two real situations keep the Yaque del Norte in an emergency: the discharge of untreated water and cattle ranching on steep slopes, growing short-cycle crops without good practices, and generating a decrease in flow.

“We are not treating the waters after using them and that is an irresponsibility that we have as a society,” says Olmedo De León, director of Sociedad Ecológica del Cibao.

“What is being done is not treating the water properly and it goes into the river and turns it into an open sewer, many people have this river as their only source of water for their communities,” explained De León.

Second of the island

The Yaque del Norte is the longest river in the country and the second longest on the island, with the first place going to the Artibonito River.

The river rises in the Central Mountain Range, at an altitude of 2,580 feet in Loma la Rusilla, and flows into the bay of Montecristi, Atlantic Ocean.