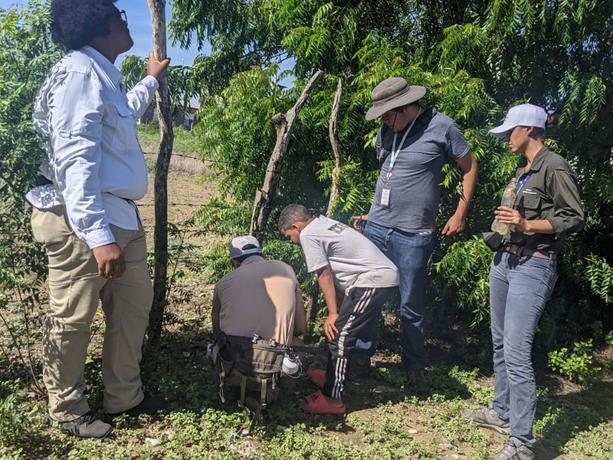 The team of researchers from the Environment and the Museum of Natural History. faith

Santo Domingo, DR
A team from the Biodiversity Directorate of the Ministry of Environment and Natural Resources, together with specialists from the Museum of Natural History, went to the Northwest Line last week to “collect” a species that causes injury to agricultural workers’ area.

“We went to the places where we had the reports; however, we communicated with the authorities and they told us that there were no records, but in spite of that, as it was the proper thing to do, we went and collected several specimens, but we are still in the process of investigation,” informed Isabela Hernández Rodríguez, in charge of the Invasive Exotic Species Division, of the Biodiversity Directorate, of the Ministry of the Environment.

In a conversation with Listin Diario, Hernández Rodríguez indicated that “they have nothing conclusive” because the trip occurred recently, and they must continue with the investigations.

In addition, he said that it is in the hands of the person in charge of the Zoology Division, of the Research and Conservation Department of the Natural History Museum, Gabriel de Los Santos, who will be in the order of the part of “identification of the specimens found.”

He said that they would issue a communication to the media when the investigations are finished.

Listín Diario revealed that at least 15 cases of people with bites of a type of Loxoceles spider had been registered, according to the general surgeon and laparoscopist Rafael Pichardo.

The head of the Zoology Division of the Research and Conservation Department of the Natural History Museum, Gabriel de Los Santos, asked not to attribute to those of the Loxoceles until a specimen that has bitten someone, dead or alive, is obtained.

The doctor of the Northwest Line had said that “there are already more than 50 cases that he has registered in his offices of patients with stings” in only three years.

Environment urged to keep homes clean.
At the end of August, according to newspaper archives, the head of the Biosecurity division of the Ministry of Environment and Natural Resources, Brígido Hierro, said that the population was unnecessarily worried about the spiders and insisted that homes should be kept clean.

Hierro recommended not to allow the accumulation of spider webs in the houses and to dust frequently. He urged that the spaces near the bed should be checked before going to sleep. Likewise, when getting up, shake your clothes and footwear in case a spider is waiting in the clothing.

Public Health without certainty of arachnid species
The Vice-Minister of Collective Health, Eladio Pérez, said that the origin of the lesions could neither be affirmed nor denied since “the patient himself has doubts” about whether it was due to an arachnid bite.

“There are no evil spiders jumping on people and it is simply to take the necessary measures in case of bites, because it is a species of the 400 spiders that live with us on a daily basis”, said Perez in a press conference at the beginning of this month, to present the results of the investigations on the cases reported in Mao and Monte Cristi, among other localities of that region.

There are no records.
Public Health affirms that there is no information on medical cases related to spiders in the country.

In the country, there are three native species of Loxoceles, the genus of which is the recluse or brown spider; however, in Hispaniola, more than 420 species of spiders have been registered.

These species are distributed throughout the national territory and terrestrial environments, from around Lake Enriquillo to Pico Duarte.

The three spider species on the island are Loxosceles Caribbaea, Loxosceles Cubana, and Loxosceles Taína. “All three, being part of the same genus as the recluse spider, have the same venereal capacity, so they can produce the same symptoms, but these are of native biodiversity and are naturally found on our island,” states Hernández Rodríguez.

Brown recluse spiders do not use webs to capture food. Therefore, webs on walls, ceilings, or other exposed areas are from other species.

“Ay, mami, cuidado que te va a picar a ti,” shouted the seven-year-old granddaughter of Miladys Medina while they were in their bedroom in Ámina, Mao, de Valverde, this is how the spider injured Medina.