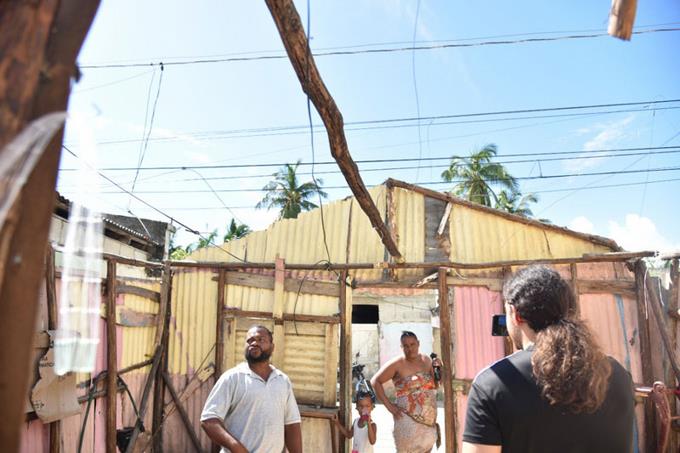 Samana, DR
Far from the white sand and turquoise blue sea that make up the paradise beaches of Samaná are the people who suffered from the passage of Hurricane Fiona.

The atmospheric phenomenon caused material havoc and revealed the rift between the working class of Samaná and the tourists. It is a reflection of society, and how the marginalized sectors cling to government aid, which in some areas has arrived half-heartedly and in others has not even realized the need.

This is how communities such as El Cangrejo, Cacaveli, Loma Colón, Obdulia, and even areas near the highway try to survive, clinging to the hope that at some point, from some public institution, they will be helped to rebuild their homes.

“Sure, here in Samaná came the president (Luis Abinader), Public Works and many officials, but they did not come to the neighborhood; they came to the head municipality, to the beaches and all those tourist areas,” claims Ricardo Martínez, a resident of Cacaveli.

Ricardo considers that, for the rest of the community of Cacaveli and nearby areas, the visit of the president and officials was just that, a visit far from the reality of the marginalized areas, which in turn were the most affected.

“When the zinc roofs were blown off, I knew I was going to lose everything,” said Ricardo, and at least five neighbors who approached a team from this newspaper while touring the area agreed with his comment.

According to the neighbors, the storm’s effects began to be seen at 1:00 in the afternoon, and an hour later, everyone had already left their homes to take refuge under concrete roofs.

The strong winds of Hurricane Fiona made way for the torrential rains to make their homes inhospitable, flooded, deteriorated, and without sparing any furniture.

Among the inhabitants of this sector, a few kilometers from the center of Samaná, the same comment is repeated: “I lost everything; only the rubble remains.”

Without work or home

Sánchez, in Samaná, is a municipality of fishing tradition, a few meters from the sea and far from the major tourist centers of the province.

There, right near the fishing dock, is the neighborhood of El Cangrejo, an area that was hit by the atmospheric phenomenon that hit the country with category one hurricane force winds and where its inhabitants still hope to be rescued.

A few meters from the entrance to the neighborhood is the house of Benjamín Santana. Both he and his wife had to abandon their home after the hurricane took their zinc roof and even the door that afforded access to their house.

While they were trying to protect their six children and calm them from the storm’s effects, the roof was detached from the structure, it flew off, and they were left unprotected, which caused Benjamín to seek shelter at a neighbor’s house.

“The roof blew off here; we don’t know where it went, so I can’t even put it back on, and that’s why we can’t live here. Some people from the neighbors’ association came to see the damage and to write it down on a list, but nothing has happened,” he commented.

More than a week after the hurricane, Benjamín and his family are sheltering in a house they borrowed temporarily, but just yesterday, the owners demanded that they vacate it.

In addition, both Benjamín and a companion with him agreed that fishing “is down.” Many families’ livelihoods in El Cangrejo depend on what the sea can provide. Yet, after the passage of Fiona, the water remains turbid and without the presence of marine species.

“Nobody likes to live in someone else’s house, being in need and even ashamed of not being able to fix their house because they don’t have a job,” Benjamín lamented.

At the edge of the highway on the road to Las Terrenas, through which a high volume of vehicles passes daily, is a community that not even its residents have defined with a specific name. Some say it is Obdulia, and others Come Pan, but they downplay its importance.

On a hill next to the road stands what was once the house of Epifanio Green, or “Nico” as he is known among his neighbors.

Some five zinc sheets, supported by some tree poles, formed what looked like a temporary shelter to cover himself from the water, and in the protected area, there were only some of the belongings that Nico had left after the storm.

Just those five sheets were the only thing he and his neighbors received from a government institution, which they did not even know which one it was. “Some people from the government came here and gave 200-odd zinc sheets for all of us who lost our houses. They left them and went away, but they said they were coming back to repair the houses,” said a hopeful Nico.

Nico does not know how to “build” a house with five sheets of zinc, as do other residents, so they managed to try to place them in such a way that they could at least cover themselves from the water and the inclement weather.

Even though he lost his house and belongings and it has been a week without news since the promises of help from the government, Nico keeps smiling.

Just like the cases of Benjamin, Ricardo and Nico, there are hundreds of families in the Samana province, and more specifically in the marginalized areas, who maintain the hope of being helped by the authorities to recover their houses and, above all, their lives.

It is not only in Samana..two weeks after Fiona, many parts of La Romana still have no water and electricity is only for a few hours daily . The entire country knows that ,unfortunately , this is a government of great propaganda only.