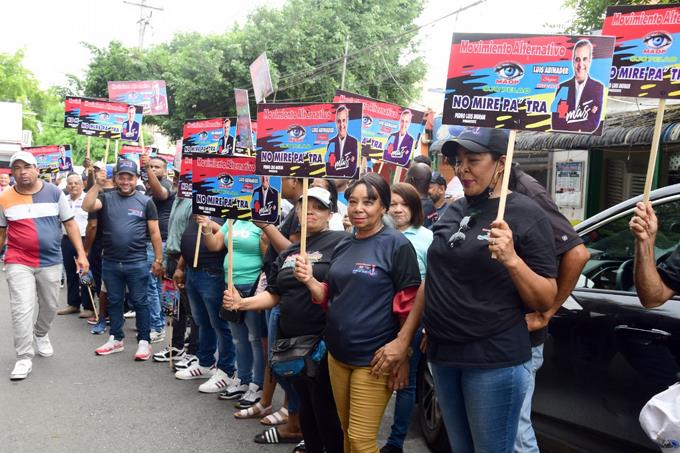 Santo Domingo, DR.
In September 2021, President Luis Abinader said that it would be in the middle of the following year when he would announce whether or not he would seek a second consecutive term at the head of the Executive Branch. Since then, every time he has been questioned about it, he has constantly repeated that “he does not know yet.”

However, the propaganda from the ruling party has begun to grow, and every day the intention to work with Abinader as a figurehead for the 2024 electoral tournament is less and less hidden. This is evident every time there are banners in the official acts outside the National Palace, elaborated with precise planning, always promoting “four more years.”

The most recent sample occurred just yesterday, at the Los Cachorros club in Cristo Rey, when dozens of citizens with silk-screened signs came to “ask” the president for another term as head of state.

The same thing happened in Los Guaricanos, in Santo Domingo Norte, where posters with his image appeared next to congresswoman Betty Geronimo. She is working on her pretension as a mayoral candidate of that municipality.

This reelection, of which Abinader at some point in his life as an opponent has always expressed his opposition, has already reached even the National Palace. In this place, until this week, he had always been careful about doing acts or giving statements that would serve to promote the president for 2024.

At the beginning of this week, the president of the Modern Revolutionary Party (PRM) and current Administrative Minister of the Presidency, José Ignacio Paliza, said that if the national elections were held under the present circumstances, Luis Abinader would win “without major setbacks” in the first round and the ruling party would double the number of votes of the second place candidate.

These declarations by Paliza were made without either the president or the party itself having even made official Abinader’s aspiration; however, and here we could enter into the realm of speculation, the PRM and its top leaders are sure that with the president, they will be able to repeat the numbers of the 2020 elections when they won with 53.03% of the votes.

The only “shadow” that can be said to be cast on the president within the PRM is by Guido Gómez Mazara when he says that the one who “makes possible and guarantees” the maintenance of the party at the head of the Executive Branch is “another candidate” and not that President Abinader repeats on the ballot.

In the meantime, it remains to wait for Luis Abinader’s pronouncement as to whether he will seek, again or not, the country’s presidency.

-1
Reply
Ala
Reply to  RICHARD

Maybe better not. Because he is doing bad things. For example he will destroy Samana Bay with building the harbour for cruisers.