Abinader promises to give dignity to police officers 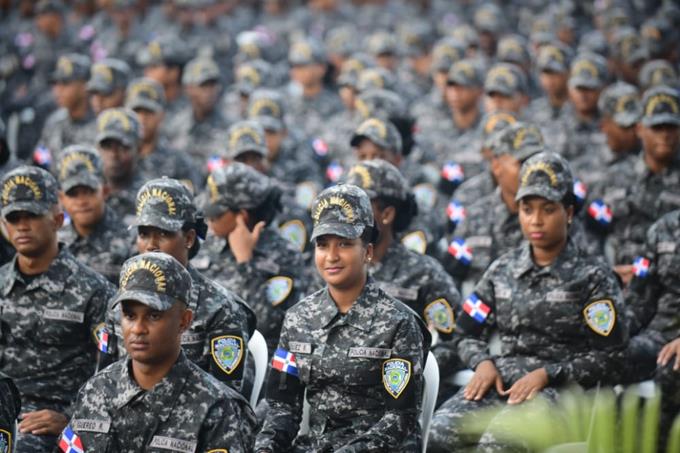 Hatillo, San Cristobal, DR
In the interest of corresponding with the commitment he assumed since the campaign to dignify the life of the National Police officers, President Luis Abinader led yesterday the graduation ceremony and swore in 901 conscripts of the police force as privates.

“They swear by God, by the homeland and by their honor to defend the independence of the Republic, its constitution, its laws and regulations; to be loyal to their institutions in principle and obedient to their hierarchical superiors, going so far as to sacrifice their lives if necessary in the interest of the homeland,” the president proclaimed with his right hand in the air, receiving a chorus of “yes, we swear,” in response.

This is the first time that a head of state made an appearance in an activity of this kind, so, having received the honors, the President took the opportunity to give a message of congratulations and encouragement to the cadets who were invested, ensuring at the same time that their presence in this activity honors the commitment of the current government to improve the quality of life of police officers.

“Many congratulations. I take this opportunity to reiterate with my presence our concern to improve the dignity of our police officers and the commitment of the speaker, our government and the country to support the National Police and all its members,” said the head of state.

Named “President Antonio Guzman Fernandez,” this is the 138th promotion of conscripts of the police force and took place at the “Eulogio Benito Monción Police Training School” in the municipality of Hatillo, San Cristobal.

According to Colonel Jorge Landeta Estrella, director of the school, the graduates are 152 women and 749 men, of which a total of 206 will serve in the ranks of the Lince Unit, and 104 will join the service with the gray beret.

Speaking at the event, Abinader called on the nearly 1,000 graduates to make a commitment under oath to take to the streets to defend the Dominican people, to do so with justice and respect for human rights, but at the same time with the firmness to execute the law and the Constitution.

“The Dominican people and its government expect a lot from you, and I am sure that you will honor the commitment that the Government and the Dominican Republic have given you today,” said Abinader, who the police academy recognized with a statuette for his work in favor of the National Police.

The activity was attended by the Minister of Interior and Police, Jesús Vásquez, and the director of the National Police, General Eduardo Then.

“We feel very proud, happy to see that all the sacrifice has been worthwhile,” expressed the now private Lidia Santos, speaking on behalf of her classmates, after having graduated after eight months at the center with long intervals in which they were forced to remain separated from their families. Hundreds of family members of the new officers gathered in Hatillo in the early morning hours.

that all sounds good but respect and honor is earned and not given. once the police straighten up, stop the corruption and work for the people then that is a first step start but these statements the president gave only fuels the corruption and bad behavior of the cops.

I think President Abinader deserves a lot of credit for tackling so many neglected issues during his first term. But the police leadership must stop abusing people in poor neighbourhoods; and you absolutely have to shut down crackhouses. There are three crackhouses in the shadow of the San Carlos National Police Station where the central flower market is located. Everyone knows they are operating yet the police do nothing. Why ?