It will be known tomorrow night who won in PLD 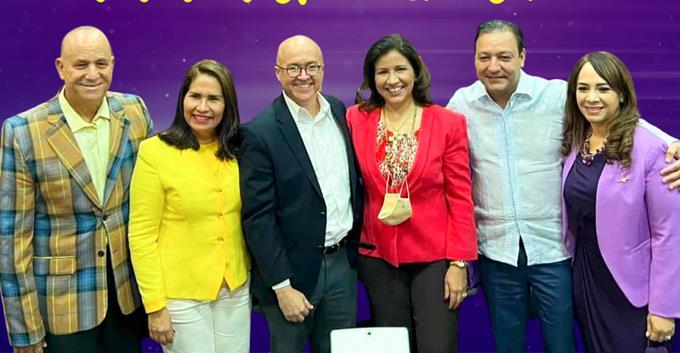 The PLD will submit to consultation five candidates of the presidential candidacy for 2024.

Santo Domingo, DR
The secretary of Electoral Affairs of the Dominican Liberation Party (PLD), Tommy Galán, said yesterday that the results of tomorrow’s internal consultation will be announced just a few hours after the selection process for the presidential candidate for the 2024 elections has concluded.

“We think that at 8:00 p.m., at the latest 9:00 p.m. it will be possible, although there will not be definitive results at 100 percent of the tally sheets, but possibly a trend may already be evident with a high percentage level of the counted tally sheets,” explained Galán.

Voting will begin at 8:00 a.m. and conclude at 5:00 the afternoon. Around six million people will be eligible to vote.

Today they will be tested.

Meanwhile, the coordinator of the organizing committee of the consultation, Alejandrina German, reminded that today they would be testing the equipment to guarantee that tomorrow everything will be ready so that the PLD members and the population in general, who do not belong to other political organizations, can vote for the candidate of their preference.

This Sunday, some 30,000 militants of that organization will be in charge of the day of participation organized in 2,732 Consultation Center Commissions (CCC), which will operate in 1,589 precincts throughout the country. These volunteers have been proposed or agreed upon by the aspirants and have received training for the different stages of the process, including voting machines.

Last Wednesday, the distribution of equipment and materials began. There are 2,988 machines, accompanied by suitcases containing the necessary paperwork and materials.

German stressed that using public sector schools for the consultation has the endorsement of President Luis Abinader and the Ministry of Education.

Germán reiterated that the PLD does not fear a possible division after the consultation process because the process’s dignity, transparency, and fidelity are guaranteed.

“No comrade will have reason to say that some trickery was done to make him lose, since the process has been set up with the participation of all the representatives of the aspirants and we are sure that there will be no problems… due to lack of credibility of the results,” he added.

“The most important thing is that from the first link to the last of this process everything has been done in consensus with the aspirants, so there has not been any controversy among them, or difficulty of any kind and we hope that the process concludes in this way,” said German.

On this matter also, Charles Mariotti, secretary general of the PLD, affirmed that the aspirants have no reason to complain because the whole process has been carried out with the consent and oversight of all.

“They signed an agreement… the agreement has been fully complied with; now, he reiterated, this agreement establishes that they cannot repent, that they have to respect the results… Now there is the right to protest; you cannot be denied that you submit an appeal through the corresponding channels in the bodies provided for by the party institutionality in agreement. And, eventually, if you are not satisfied with the decision of the party, of the organs of the party that have to do with those aspects, you go to the national courts… that is a right that you have,” said Mariotti.

Everything ready in Santiago

In the case of the province of Santiago, PLD president Arturo Tatis reported that they have 303 electoral precincts distributed by each municipal district and municipality and divided into 1,300 polling stations or CCCs.

Tatis said that some 100,000 people are expected to attend in this province.

In the head municipality of Santiago de los Caballeros, the primary voting centers are the Politécnico Nuestra Señora de las Mercedes, Liceo Escuela Santo Hermano Miguel De La Salle, and Escuela Mélida Giralt while in Cienfuegos there are six voting centers, Baitoa four; and Tamboril, San José de las Matas and Jánico two. In the other provinces of Cibao, everything is also ready.

The assembly of tomorrow’s citizen consultation rests with the Organizing Commission of the Consultation on Presidential Candidates (CONAP), which Alejandrina German coordinates.

The PLD instructions explain that when arriving at the voting centers, the voter must present their ID card to a member of the commission of the consultation table to enable the system on the digital screen. Then the images of the candidates will automatically appear on the screen.

The PLD has to do a lot to improve itself. The years of administration under the Fernandez and Medina leaderships were heavy with scandals. Do the people want to open this door again?