Woman stopped getting cancer treatment to feed her animals 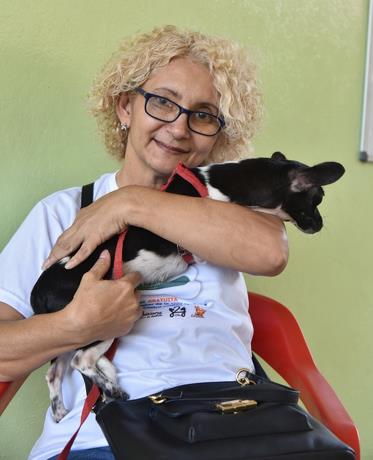 Myriam Rodríguez is president of the Quisqueya in Development Foundation, living for eight years with cancer. The metastasis is currently affecting her stomach and bone marrow. “When the neurosurgeon opened me up he said that he started to believe in God because I shouldn’t be walking”.

The struggle for animal rights provides her with the inspiration she needs to continue. Almost simultaneously with the foundation’s founding in 2014, she learned of the condition while undergoing a second day of mammography at the facility in San Isidro’s El Bonito area. She remembers that the women were “extremely impoverished women” and were terrified to enter the machine. To lift their spirits, she entered first and got her mammography. Two results, including hers, were absent when she received the results. “These two people have to go through the office so that the doctor can see them because they have a problem,” they told her. When I go, they explain to me that I have to have a sonomammography because I came out with a breast size 2”.

Myriam claims that’s where the viacrucis started. And even though she kept working for the foundation, she started to feel down. Then she thought, “Oh, man, I’m going to adopt a dog.” She had just returned from Argentina, so even though she was passionate about animal rescue (having grown up with animals), she wasn’t doing it at the moment. She remarks that after noticing the growth in animal cruelty in the nation through social media and with the adoption, she started working for the animals from the foundation and was in charge of their rescue, veterinarian care, and adoption.

“But I recognized that I would have to leave them at the vet for a while because no one would adopt them because they were mestizos, so I started looking for a place for them,” the author said. Myriam recounts that after renting a home in Santo Domingo Este “with a wide patio,” building some dog homes, and employing staff, she “started asking for and carrying the ransoms.” She now houses roughly 300 canines on a rented farm in the village of Guerra. She spends 40 thousand pesos a week on food and two employees and their Social Security, and food (they live in the place). There are 300 dogs at the shelter.

“You can do it by donating dog food, rice, chicken liver, detergent, money, whatever you want” to the foundation, says Myriam, who advocates for compliance with Law 248-12 on Animal Protection and Responsible Ownership.

More details about the work of Quisqueya in Development at: fundacionquisqueyaendesarrollo.org

We should promote and address human necessities first, and then anything else…Priorities got out of wack…!!!!