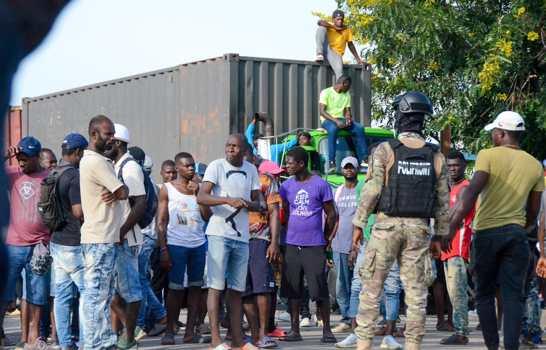 This Friday, the border gate between Haiti and Dajabón is still locked for the second day. In protest of the country’s limitations on selling petrol to automobiles with Haitian license plates, the residents of the neighboring nation blocked the entrance to Dominican territory. Additionally as a result of the alleged abuse, the traders that take part in the Dajabón binational market.

The Haitians have barricaded the road with trucks parked across it as well as with a large number of motorbikes to impede travel at the borderline between the two countries. Stones are thrown by demonstrators at individuals who attempt to enter Dominican territory. Rodrigo Pierre issued a warning that until the local authorities agree to ameliorate the treatment and permit them to refuel the vehicles they use to engage in the market, they will not allow any Haitians to enter the Dominican territory to conduct commercial activities.

Soldiers from the Army of the Dominican Republic (ERD) and the Specialized Corps for Land Border Security (Cesfront) jealousy defend Dominican territory while this is taking place on the Haitian side.

Shouldn’t they be protesting Barbecue?

Nope, they are with Barbecue. What they want is for the US backed illegal government to leave.

That is great news for the Haitians to keep the border closed. There is no need for these so called bi-lateral markets.