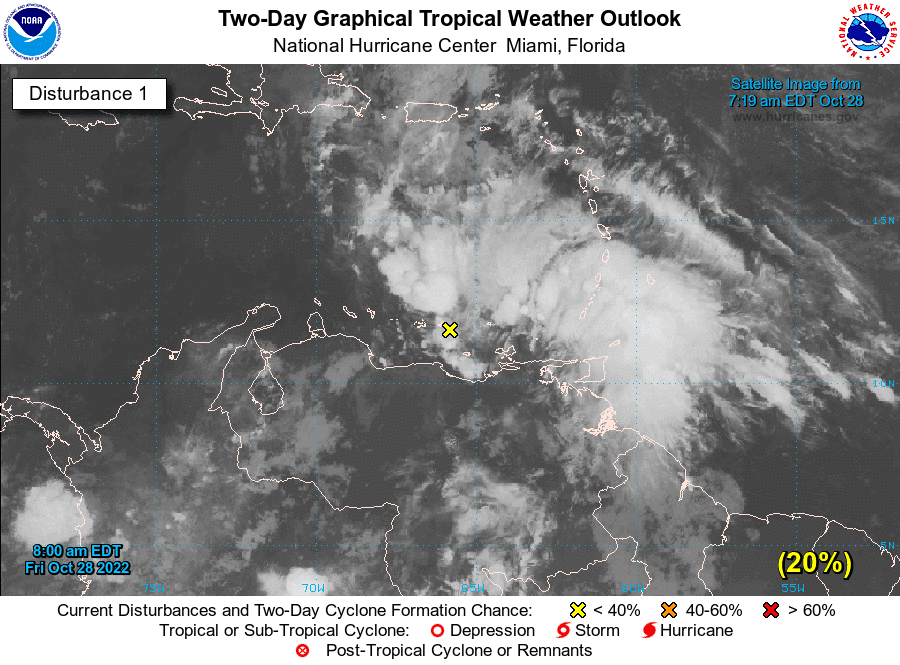 Authorities from the National Hurricane Center of the United States and the National Meteorology Office (Onamet) are keeping an eye on a sizable area of low pressure over the southeast Caribbean Sea, which has a chance of developing into a tropical depression this weekend or early next week. The National Hurricane Center reports in its newsletter this Friday that “a broad area of low pressure over the southeastern Caribbean Sea is producing a large area of disorganized showers and thunderstorms extending west-northwestward from the Windward Islands for several hundred miles.”

As the disturbance moves slowly westward or toward the north, it is predicted that the environment will be favorable for gradual development over the next few days, and a tropical depression is likely to form this weekend or at the start of next week over the central Caribbean Sea in the west-northwest. It suggests that through this weekend, heavy rain is possible in some areas of the Lesser Antilles, the Virgin Islands, and Puerto Rico regardless of development.

“Chance of formation in 48 hours… low… 20% and probability of formation in 5 days… high… 70%,” according to the National Hurricane Center. “The low pressure area is expected to form over the eastern Caribbean Sea this weekend, possibly related to the southern part of an existing low pressure trough over the area,” the Onamet adds in its bulletin this Friday.