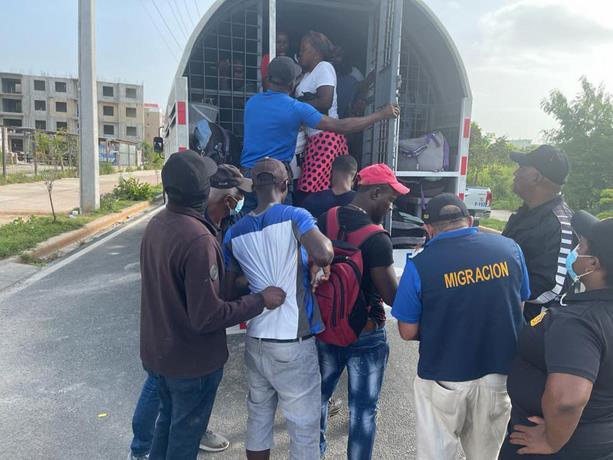 The General Directorate of Migration claims that every month it deports more Haitians and other foreigners who are in the country illegally. Archive

Santo Domingo
A day after the U.S. Assistant Secretary for Civilian Security, Democracy and Human Rights, Uzra Zeya, asked the Dominican government for attention and services for Haitian migrants, the director of Migration, Venancio Alcantara, affirmed that they would increase deportations of all foreigners who are illegally in the country.

Alcantara promised that Migration will continue and increase the deportations of all foreign citizens who are illegally in the country and that they are carried out respecting the human rights of each of them.

“When we arrived at the General Directorate of Migration we started a work with the goal of complying with the law and since we arrived we have been doing that, always respecting the rights of foreign citizens,” Alcantara said.

He explained that when carrying out the operations and transferring the detainees to the intervention centers, they are given breakfasts, lunches, and dinners since they remain in these places for one day, where they are processed and sent to their country of origin.

More are deported every month.

When approached by journalists at an event held in Barahona, Alcántara also informed that in the last few months, the work of the General Directorate of Migration had been strengthened, reaching up to a thousand deportations per day.

He indicated that in July, 9,000 foreign citizens staying in the country illegally had been deported; in August, this increased to 9,500; in September, it rose to 9,900; and in October, 15,500 illegal foreigners were deported.

Likewise, the director of Migration qualified speculations about the questionings about whether the military who carry out the operations in the streets receive bribes to free the foreigners.

“Nobody charges 5,000 pesos for the (non) repatriation of a Haitian. That is not true, that is not done there. There (in Migration), if there was macuteo before, it is over,” Alcantara affirmed.

Request from the United States

On Thursday, the U.S. government called on the Dominican Republic to continue to progress in the fight against human trafficking by investigating, prosecuting, and convicting traffickers, “protecting the most vulnerable” communities, including the Haitian population.

“This includes providing services to all vulnerable people, including Haitians and Dominicans of Haitian descent,” said U.S. Assistant Secretary for Citizen Security, Democracy and Human Rights Uzra Zeya yesterday at the National Palace during an event led by President Luis Abinader.

The U.S. representative encouraged the Dominican government to pass an updated law on human trafficking in accordance with international standards, which would facilitate the prosecution of those who take advantage of children.

“The United States has provided technical assistance to update this law, in partnership with the United Nations Office on Drugs and Crime, and we will continue to do so,” Zeya said.

The bi-national market in Pedernales yesterday normally operated, where Haitian merchants bought manufactured products near the border, such as spaghetti, noodles, corn flour, and others.

Haitians were also buying groceries, used clothes, and other manufactured products such as beverages, soda, and milk in smaller quantities than in the past days when the market had resumed its activities.

How many times has the public heard this statement? Ad infinitum!

We need Deportations of all foreign citizens who are illegally in the country and that they are carried out respecting the human rights of each of them.

Why aren’t they going after all the illegal light skinned gringhoes in the country? I never once see them jump out and ask you pasty people for documents.

-7
Reply
Ala
Reply to  The Truth Hurts