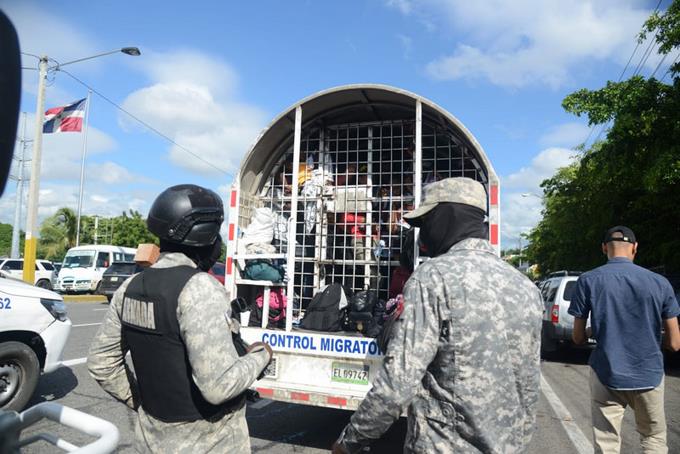 Two Migration officers watch attentively in front of a unit full of undocumented Haitians arrested during operations. After their arrest, they are taken to a purification center and those without legal status are returned to their country. HA. DONATED

Santo Domingo, DR
The repatriations of illegal immigrants, mostly Haitians, which have recently intensified in towns in the eastern region, average between 800 and 1,000 per day.

However, for the moment, these measures in the eastern region of the country are not reflected in the construction and tourism sectors.

In the case of Haitians, some, in their effort to escape from the immigration authorities and the National Police, have acted aggressively and injured Immigration inspectors.

The last of the cases occurred when a Haitian was injured and caused the fracture of the right arm of the immigration agent, Arismendi Castillo when he tried to escape from the bus where he was introduced on the El Coral highway.

The injuries forced the agent to be placed on leave for a month due to a blow with a pipe.

The operations are carried out surprisingly and include searches at toll booths, while 20 percent, or less, of those captured, are women, and the more significant proportion are men.

The actions have not been felt in the construction sector or the hotels of the area because the majority of those who do this work have visas and ID cards, which prevents them from being repatriated.

Castillo has stood out as one of his work’s most committed and responsible agents.

The Migration Directorate has adopted the new modality of having the National Police carry out the raids and then implement the arrests after carrying out the purges.

Engineer José Fantino Rijo, a construction expert very active in the region, said that in this sector, he does not notice any decrease in the repatriation of illegal immigrants.

Hoteliers consulted do not report any considerable decrease in the number of Haitians because those who work in hotels have up-to-date documents.

According to what was revealed, at least 1,000 Haitians are deported daily during the day in towns of the Eastern region.

In addition to Higuey, actions have also been carried out in La Romana, El Seibo, and Hato Mayor sectors. Because the yellow units of Migration are easily identifiable, the new modality of mobility in trucks of the National Police has been used.

The Haitians apprehended and detained do not carry documents, visas, or temporary work permits to validate their legal status in the country. Many Haitians comment that they can easily return through the border but do not do so at the same pace as before.

The mission of the General Directorate of Migration is to dminister and control the migratory flow and the permanence of foreigners in Dominican territory, contributing to safeguarding security and national sovereignty.

Its vision is “to be a modern institution at the forefront of technology,” with efficient and effective services in accordance with immigration policies, staffed with highly qualified personnel for the exercise of its functions, always adhering to respect for the laws, ethics, and morals.

On the other hand, Immigration inspectors are all the officers of this governmental entity responsible for executing the activities derived from the function of inspection, regulation, and immigration control by the provisions of the manual of operations and the Agreement of creation.

The current head of the General Directorate of Immigration is Venancio Alcántara.

The person in this situation is an irregular immigrant, an illegal immigrant, an undocumented immigrant, or simply a person without papers (without documents such as a residence permit or work permit).

“The actions have not been felt in the construction sector or in the hotels of the area, due to the fact that the majority of those who do this work have visas and ID cards, and this prevents them from being repatriated.” The hearsay reason for police not entering the properties/worksites is a supposed arrangement between them and the businesses so as not to upset tourists. What the authorities do is intercept trucks carrying workers to and from job locations to check documents. The amount of “illegals” caught detained by this method are few. What does happen is the detained “illegals” don’t get their pay and the remaining legal workers may lose their truck ride. (no riders in open trucks)

“Hoteliers consulted do not report any considerable decrease in the number of Haitians because those who work in hotels have up-to-date documents.”

Why are we giving these jobs to hatians when many Dominicans do not find jobs ???

Because I don’t want to to do what they do ….and get payed what they get payed …
We are meant to be bosses ejecutivos ,jefes …

This is the problem those “work permits”, stop issuing that thing because many dominicans do not find jobs and those who get the work permits just talk sh*t about the country.

we have to remove them from our hotels, golfcourses ect.

There are so many ruined lives because of the situation in Haiti. Ordinary people only wanting to have a nice life. Many Dominicans refuse construction jobs and desperate Haitians will do the same job for much less money. We will see if the construction industry pay more wages to hire Dominicans.

What’s with the broken english? Isn’t a journalist supposed to have a good understanding of the language?