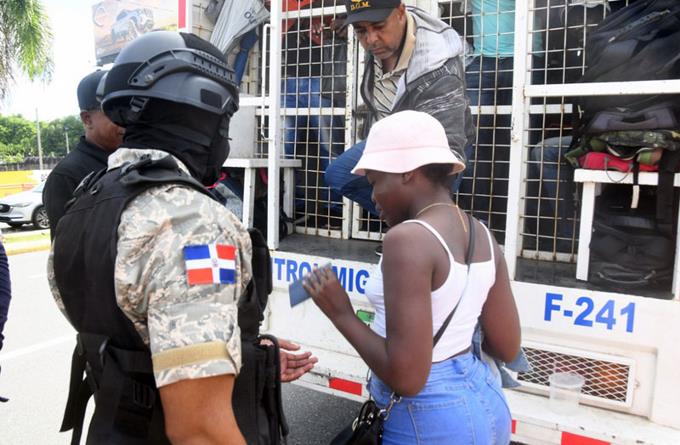 A young Haitian woman shows her passport to the Immigration authorities, but apparently the expiration date was expired. leonel matos / LD

She came running with teary eyes and a desperate attitude. She came in search of “Maxi,” apparently her sentimental partner, who was already settled behind the bars of one of the long bed trucks in which the Migration Directorate carries out its daily operations.

Evidently, if he did not comply with the requirements imposed by the Dominican government to guarantee his stay in this territory, Maxi would be deported to his country of birth, Haiti.

Her companion was also Haitian. However, he hurriedly handed Maxi the passport she was carrying, a cell phone, and a $100 bill.

“Morena, move; you can’t last so long there,” an immigration agent accused her, even though she had not been standing next to the vehicle, located on Winston Churchill Avenue and 27 de Febrero, for more than 30 seconds.

Maxi’s Haitian companion left seconds later, although the journalists present at the time of the incident did not understand in what capacity. However, there was no need to ask her or anyone else when she returned, accompanied by two soldiers and two agents of the Migration Department.

The panicked face of Maxi’s companion was evident. At that moment, the events surrounding her had happened very quickly for the spectators because the time had doubled right there, although the clock had indeed stopped for her.

“Pull her up! You can’t jump around so much, second chances are over,” said the same immigration guard who earlier complained about the time he spent talking to Maxi at the side of the truck.

The agents argued with each other for less than a minute. Then, doubts, a “, please come up,” a brief consideration of his possibilities, a minimum of open doors waiting for his entrance, and the Haitian woman, who could not be identified by name and who seemed to be in her twenties, deprived of her freedom and on her way to be repatriated.

What happened at the moment she was captured is unknown. Still, it is not necessary to make much effort to understand why she was coming towards “the truck” guarded by four people who kept her surrounded while one of them was looking at her passport. She was desperately trying to explain her situation to him.

I’m sure her explanations will fall on deaf ears. It’s a frenzy now! Sick, demented frenzy! A mob like 1921 Tulsa. I am boycotting the DR! I have yet to see anyone other than Haitians being detained. Where are the illegal Venezuelans?

You are right…where are they ? Well most of them come with money…jjjjj

it is not our duty to babysit your people, simply put.

Is not the Dominican problem Haiti should take care of their people or talk to the US which is the leading in deporting Haitians by Land and Sea.

May of them are weighing on our society ,depleting and milking us dry …Why does US not take them ?!…they have more money then DR…You gonna boycott DR …😂 😂 😂 …If we have peso for each person like your self ,we’ll be Switzerland …

Stop blaming the Dominican Republic for your identity..ask your own government to provide you with papers and stop begging the whole world for hand outs…The Haitian government is at fault.

You telling me not to beg! You guys can’t stop begging no matter how much you have.

In my opinion…even if she had oassport that expired she must have some kind of legal grounds to stay in the state that issued passport…Dominican republic.

If she’s Haitian, the issuing country would be Haiti….not the DR.