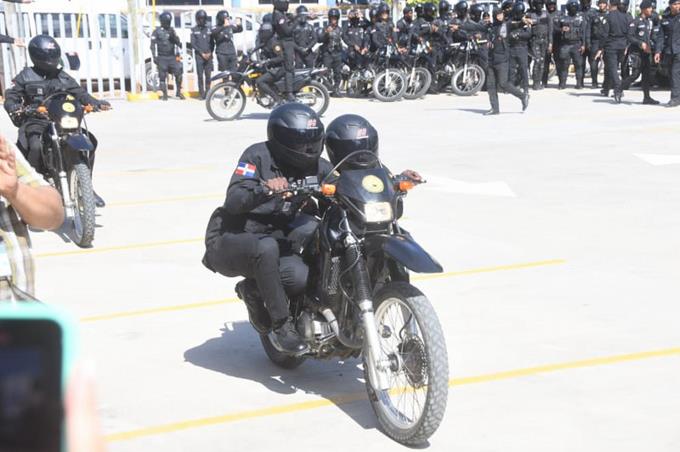 The beginning of this new strategy took place in the Banreservas Tower, in the Winston Churchill.

Santo Domingo, DR
Yesterday, the implementation of the strategic plan “Patrolling by Quadrants,” a technique that consists of small geographic delimitations of a fixed sector to which personnel are assigned, to optimize and make crime prevention and deterrence more efficient.

The initiative began with 504 police officers and 84 quadrants. In each area that makes up the central polygon, there will be 18 agents who will work in three shifts.

During the event, which marked the opening of this security strategy, it was informed that 33 vans, 84 motorcycles, 33 car kits, 504 body cameras, 117 communication radios, and 117 cell phones were available for its execution.

The executive commissioner for police reform, Vila del Castillo, explained in detail the protocol to be followed by law enforcement officers to execute the plan.

“You (police officers) must frequently cover the quadrant in a stealthy manner and be attentive to any event that may occur, with frequent stops to make contact with the neighborhood,” he said.

It is essential, Vila instructed the police officers, “to be friends with the community members in the area: exchange numbers, know each other’s names.”

According to Vila, during the activity, the police officers are instructed to provide residents with their identification and cell phone number for any assistance they may need to provide. They must know where the schools, benches, grocery stores, bars, restaurants, and other establishments are located.

The authorities informed that Patrolling by Quadrants will be accompanied by the Command and Control System, which has been implemented since last April and offers an expanded panorama of crimes, including injuries, homicides, and robberies. In this way, it was reported insecurity indicators would be displayed, such as information on suspects in absentia, convicts, and fugitives.

I saw an increased presence of National police in Bavaro, totally immersed in staring at their phones. Some things never change.

I should add…why do I see a ton of Digisett officers all along the road when some Santo Domingo fatcat is coming to town, and next to none when it comes to traffic enforcement at the major intersections on the tourist boulevard? Can someone explain? Are they like the King’s “ceremonial guard” all spiffy and green, or are they traffic law enforcement officers?

The officers along the road is about being seen by the big shots. It is all about the image they portray. I can tell whenever a big shot is about by the increased numbers of uniforms, especially at the Coco Loco crossroad.

It always seems to be a big pool of police during these events. It would be a better image to see these big pools ridding undesirables from the streets.