Álvarez urges the UN to send a multinational force to Haiti 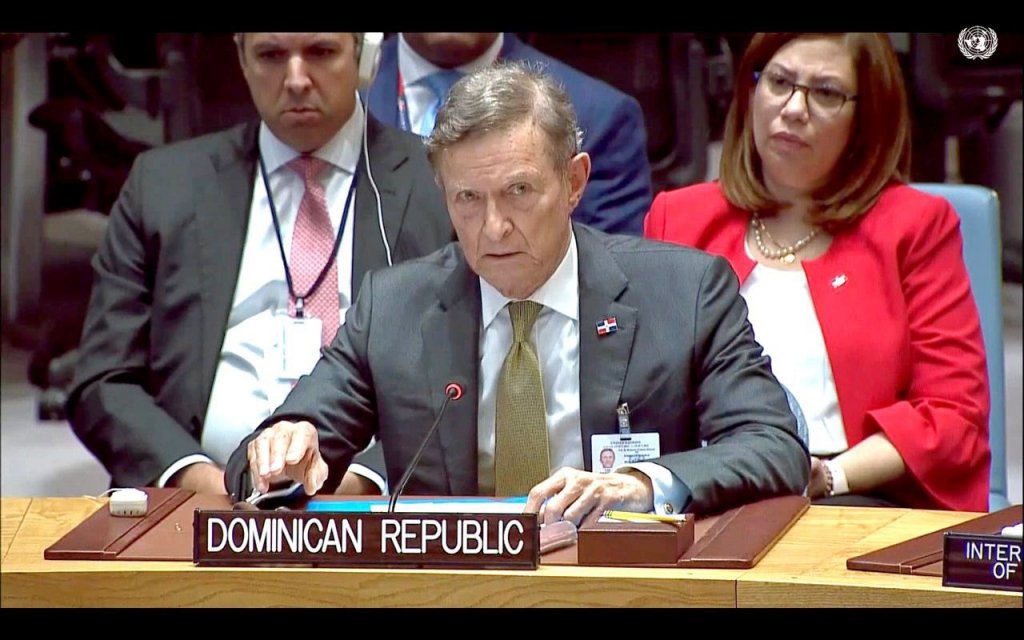 On Wednesday, Foreign Minister Roberto Alvarez told the United Nations Security Council in New York that the body has been directed to “concretize’ as soon as possible” a multinational force to assist the Haitian National Police. According to a Foreign Ministry statement, this is “the only viable path in the short term to redeem the Haitian people from the current horrendous situation and thus bring the well-deserved tranquillity to America.” After acknowledging that “Security Council resolutions 2645 and 2653 have borne their first fruits by beginning to apply bilateral sanctions to who finance the gangs,” the Minister of Foreign Affairs stated that the threshold of good intentions in this situation had already been crossed.

In that order, he added, “now we hope that the Sanctions Committee and the panel of experts ordered in said resolutions will begin their work next January, to have a greater scope in criminal prosecution.” “We know and insist that the solution to the Haitian crisis will come only from the Haitian people and their leaders, through tenacious dialogue and long-term political agreement, but they cannot do it alone today,” the minister added. Alvarez recalled that the Dominican government has expressed its strongest support for UN Secretary-General António Guterres’ position that “while aid for the training of its police is being consolidated, a robust force capable of restoring peace and putting an end to the violence unleashed by armed gangs infiltrated by political and economic power” is required.

The Dominican Foreign Minister stated that the Dominican Republic is doing its part to help Haiti to the best of its ability, citing the closure of the Varreux port terminal as an example. He confirmed that, at the request of Haitian authorities, the country facilitated access to fuel for some basic operations on the other side of the border, such as hospitals, supermarkets, free zones, agro-industries, banks, third-country embassies, and international organizations that operate in Haiti, such as the UN.

The United Nations on Wednesday urged “every country with the capacity to do so” to consider joining an international military force to assist Haitian authorities in restoring security and alleviating the humanitarian crisis. “This is necessary for Haiti to return to institutional stability and the path of peace and sustainable development,” UN Deputy Secretary-General Amina Mohammed told the Security Council.

The elitists in Haiti do not want external forces to get involved. But they are not suffering. They have water, food , fuel and money. The Haitian people however do not agree with the elitists which accounts for the popularity of gang leaders . Time to listen to the people !