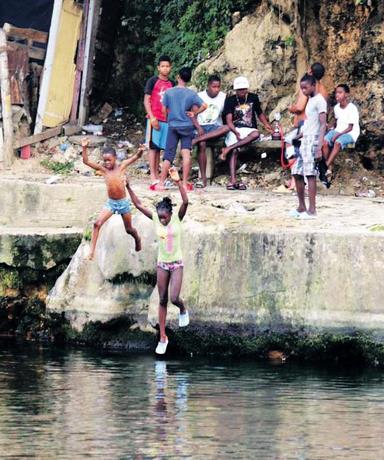 Santo Domingo, DR
The residents of the La Zurza sector, a locality of the National District where four new cases of cholera were confirmed almost a week ago, have had to modify their habits and take extreme hygiene measures to avoid contracting the disease.

Housewives, the elderly, and young people said they only use water from the water tanks recently installed by the Santo Domingo Aqueduct and Sewerage Corporation (CAASD) for cooking and doing their chores.

“At every certain point, there are four large water tanks that are filled twice a day and with that water we do everything, because we cannot use water from the well or from the river, due to the weeds,” said Mariela Veras, referring to the degree of contamination of the La Isabela River.

Although the Dominicans said they were aware of the threat posed by cholera, the Haitians residing in the area continue to bathe and even wash their clothes in the pool, which shows how unhealthy it is.

Given this situation and the number of Haitians residing in the area, the health authorities have prepared awareness material in Creole and Spanish so that foreigners can receive in their own language the necessary preventive information to avoid the spread of the dangerous disease.

“We have been educating them house by house, we are taking them educational material in Spanish and Creole because there are some foreign citizens here, but the Dominicans have mostly heeded the call for prevention, which is what we are looking for,” said the director of Area IV of Public Health, Jesús Surdí.

On the other hand, during a tour made by journalists of this newspaper, a brigade of workers of the Mayor’s Office of the National District was observed in the area, which has been cleaning all the places that could be a focus of bacteria since yesterday morning.

By order of the Minister of Public Health, Daniel Rivera, a mobile hospital was installed last Monday in La Zurza. A team of doctors assists all citizens who present any symptomatology related to cholera.

Dr. Máximo Canela, in charge of the unit, explained to journalists of Listín Diario that, although the number of patients has gradually decreased, each patient is evaluated, submitted to treatment, or referred to a hospital center, depending on the case.

He added that they are also doing “an educational work by handing out flyers containing essential information on cholera.”

A week ago, the Ministry of Public Health confirmed four new cases of cholera, for a total of six in the country. All correspond to Dominican citizens residing in the La Zurza sector of the National District.

The health authorities urged the population not to be alarmed, to remain alert to reports, and to follow prevention measures such as frequent hand washing, washing food properly, eating well-cooked food, and drinking only potable water.

They also recommend going to the nearest health center for investigation and timely treatment if you have any diarrheal events.

On Thursday, the proposal of the Listin Diario newspaper in its Wednesday editorial to cordon off and prohibit the access of bathers to the Isabela and Ozama rivers due to their high levels of contamination and the recent incidence of cholera bacteria was positively accepted by the Ministry of Health.

According to Dr. Daniel Rivera, Minister of Health, the analyses to understand whether or not it is necessary to limit the passage to both river sources are already underway.

Rivera added that, as Public Health, they are going to wait until they see the cultural studies in the waters of the two rivers to proceed to accompany the acting institutions as much as they have done in the intervention process developed by the Ministry in the capital sector of La Zurza, where the first cases of cholera have appeared in the country.

The Ministry of Public Health reported that eight cases had been confirmed in the Dominican Republic, and six others are awaiting results. It explains that since the cholera cases appeared in Haiti, more than 3,000 tests have been carried out in the country to detect the disease.

To combat the disease, the authorities continue to intensify preventive measures through water chlorination, monitoring in schools where toilets and pipes are being repaired, installing new water tanks, creating wells for drinking water supply, and cleaning rivers.