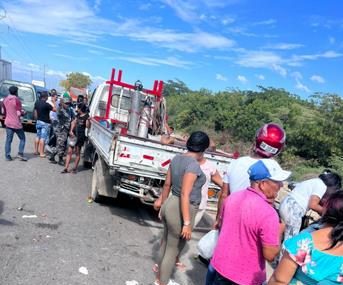 A person was killed in a traffic accident in Puerto Plata on Wednesday. The accident involving a truck and a motorcycle happened around noon on Thursday. The accident occurred in the Habanero community, near the highway that connects the Barahona province to Santo Domingo and killed one person on impact. Richard Nixon Corniel Espinosa, who was driving the AX-1000 engine in black with the license plate k0253901, was killed in the accident.

The truck driver’s name has not been obtained because the driver of the white Hyundai truck with license plate L254599 fled the scene. The driver allegedly abandoned the vehicle to avoid being violated by residents of the Habanero community. The site was visited by members of the General Directorate for Traffic Safety and Land Transportation (Digesett), the National Police Southern Regional Directorate, and the Public Works Road Commission.

Members of the entity transferred the truck to the police headquarters in the city of Barahona, while it is unknown if the driver turned himself in to authorities.